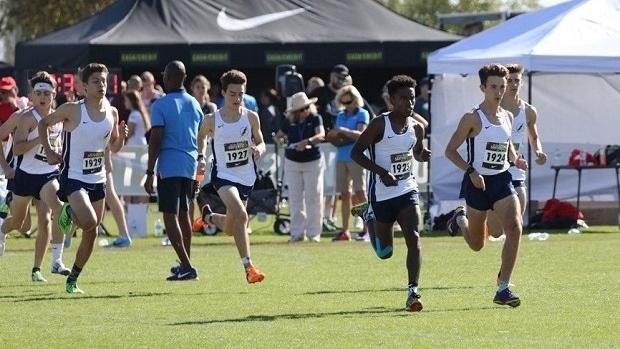 (Desert Vista were granted a highly contested at large bid to NXN this past Saturday.-photo by Alan Versaw)

Arizona Sends The Thunder To NXN

The drought is over for Arizona boys as the State sends its first boys team to Nike Cross Nationals this Saturday. The Saturday prior to last, the Desert Vista boys took a heart-breaking loss at home in the Southwest Regional with a 4th place finish, behind Mountain Vista (Highlands Ranch, CO-1st), Springville (Springville, UT-2nd) and Timpanogos (Orem, UT-3rd). After smashing records throughout the season and winning State with 36 points, one of the all-time lowest scores in Arizona history, the book seemed shut for the Thunder.
Still, there was a spark of hope. With a 4th place finish, Desert Vista were eligible for an at large bid to be decided by a committee amongst the 8 NXN regions and the California State Championships. In the past, the Grand Canyon State had been well represented at Nationals but only by female teams and several individual girls and boys. First the Sandra Day O' Connor girls team of 2006, went to the national race back when it was Nike Team Nationals. The Xavier Girls teams of 2011 and 2015 went to Nationals with runner-up finishes at Regionals and finally the Desert Vista girls' teams of 2014 and 2016 went to Nationals with runner-up finishes at Grande Sports Academy.
On the other hand, Arizona Boys teams had never had the same showing in the Southwest. The Corona Del Sol Aztecs finished 6th in the Regional race in 2013 which until November 18th was the highest Arizona boys team finish. Over the years, our boys have been drowned out by Utah and Colorado's presence at Nike Southwest for a variety of possible reasons.
One thing's for sure. With six Seniors, Desert Vista will not be the same team next year. Which means they've got one shot to show what they can do on the national stage. And furthermore, it has to make us wonder, "When will we see another Arizona boys team qualify for Nationals?" and "What's it gonna' for Arizona boys to break through the torrent from the North?"
Also, Maya Smith (Northland Preparatory Academy, Sr.) and Samantha Schadler (Rio Rico, Jr.) finished 2nd and 3rd respectively at Southwest, earning their berths to Portland. Maya smashed her PR at the Grande Sports course by almost twenty seconds and will be the first to represent Arizona out of Division 4, while Samantha will keep the tradition alive in the Schadler household with her own NXN berth, after seeing her sister Allie qualify twice.
Best of luck to these nine athletes on their way to Nationals. Arizona will look forward to seeing Smith and Schadler compete the as individuals in the Girls' race, and the Boys of Thunder duke it out with the top guys in the nation.
Tweets by MileSplitAZ