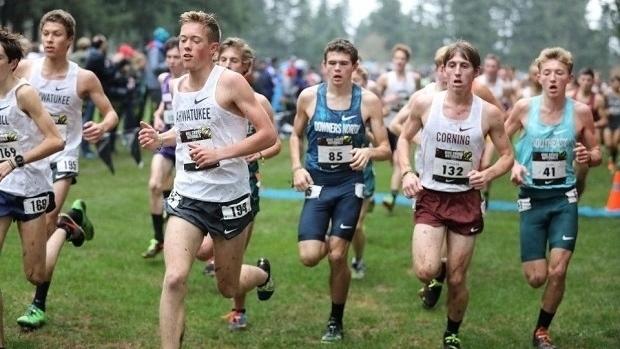 By Aksel Laudon (Desert Vista, Sr.)-125th at NXN
25 November 2017 - At-Large Bids Announced
The cards were stacked against us, but that did not stop us from getting back to work. One week ago, we far underperformed our capabilities on the very day that we had circled on our calendars six months ago, Nike Cross Regionals Southwest. Now, we kept training on the tiny chance that we would earn an at-large bid to NXN. I was away from the team spending time with my family for Thanksgiving in Tucson. I put in 11 miles on the trails of Saguaro National Park while my teammates did the same on a canal back home.
That night, I took a deep breath and checked my phone. What I saw I did not believe: a screenshot of a MileSplit article with the words "Boys Team Four" and "Desert Vista, Arizona". We got the bid. We made it. We were going to NXN! I Facetimed Habs who was already at Coach Hanson's house celebrating with some teammates and alumni. Everyone was going crazy. People questioning our right to a bid only further incensed our determination. Desert Vista can run, just wait and see.
30 November 2017 - NXN Day 1
I drove to Sky Harbor Airport with Habs and Sammy where we met Coach Hanson and the rest of the team. Even though we wore matching sweats, Nick Thatcher's hair set him apart. We shaved his formerly long locks in the shape of an arrow, an imitation of The Last Airbender, on a yearlong bet---that we would not make it to NXN. Our plane landed in foggy Portland mid-afternoon. Seeing "real" trees on the drive was a real treat for us Arizona boys. We quickly changed into our running clothes to take a bus to the Nike Headquarters. After spending time there with other athletes, we were called to the auditorium to receive our gear. Upon entering we were each greeted by the high school runner's dream: a locker with our name above it stuffed with new spikes, custom trainers, socks, sleeves, warm-ups, shorts, backpack, and a feather-light singlet emblazoned with our hometown, Ahwatukee.
Next, we squeezed in a quick run on the Nike campus. Because of the darkness, we did the shake out run around Michael Johnson track, literally following in the footsteps of Nike elites like Mo and Galen. Cold and tired after an eventful day, we then chowed down on a tasty buffet dinner.
1 December 2017 - NXN Day 2
After a good breakfast at the hotel, it was time to head over to Glendoveer Golf Course for the course run-through. Once there, we were first taken into Athlete's Village. Curtained rooms assigned to each team line the sides of the large barn. Running the course, the hills did not intimidate, but the surface caused some concern. Our feet either sunk into the mud or skidded across the slick surface.
At dinner we were sat with Bowerman Track Club athlete Amy Cragg, former ASU Sun Devil. She provided inspiration that stuck with me for the next day. Experienced with waking up before the sun to train as we were, she reassured us that we were tougher than any other team at the meet. This helped me to subdue my previous thinking that the other teams were more prepared for the wet and cold conditions. Now, I was ready to attack the course. NXN is more a mental test than physical display, and one must arrive ready to lay it on the line.
2 December 2017 - Race Day
After rising at 6:00 a.m. with my roommates Habs and Reece, we donned our race uniforms (stopping to flex in the mirror) and ate a race day breakfast. For me, a bagel and a half of a banana was enough. The mood on the bus was somewhat tense and even more tangible in the Athlete's Village. After our jog, we laced up in Athlete's Village and were escorted to the finish line for introductions. None other than Galen Rupp himself greeted us with high fives and a memorable "Let's get it, boys!" before we ran out in front of the crowd, absorbing the atmospheric energy.
We altered our strategy slightly from our typical method of working up from the back. Coach Messer provided insight from his previous NXN experiences that the team needed to get out at the top part of the field, simply because passing 100 bodies is too difficult. When the pistol sounded, I got out harder than I ever have before in a cross-country race. My legs felt weightless, carrying me into about the top third of the field. I found Habs and Reece after the 400 and stuck on them as long as I could, through about 1.5 miles. The hills and straightaways became a blur as the pain began to seep through my adrenaline. Soon enough, the final, legendary double-terrace hill confronted me. Upon cresting it, the finish line shone like a beacon. I kicked all the way across it, then collapsed to my knees in the mud. Lee helped me up and we got the team together.                                                             (Aksel midway through the race.-photo by Ben Crawford) 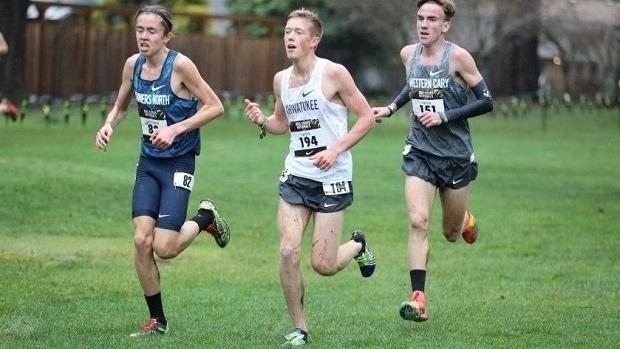 We quickly arrived at the conclusion that we had collectively run a good race. This was all we needed to do. When we found we were 8th, I was overcome by a rare sense of satisfaction. We had not just proven the doubters wrong, but more importantly and more lastingly, we had validated the countless miles and sacrifices leading up to this result.
After the race, we enjoyed ourselves. We took pictures with Drew Hunter and ran around trying to keep up with Katelyn Tuohy as she crushed the course record. Back at the hotel, we feasted on chicken fingers, macaroni and cheese, and ice cream. Six months of abstinence from these wonderful foods made this moment euphoric. The rest of the day was spent hanging out with other athletes like the C.B.A. boys. Their races behind them, even the most typically stoic star athletes were able to loosen up. At the dance, I was exhausted, but some of my teammates still went ham on the floor. Thatcher even took on Brodey Hasty in a dance battle.
3 December 2017 - Home
We left for the airport at 3:30 a.m. When we landed in Phoenix, it was a tough snap back to reality. For three days we lived the dream, being treated like sponsored athletes and duking it out with the best in the nation. However, the real dream was four years long, in every step of every run that brought us closer to one another and to this goal. Bring it on, track!
Aksel Laudon-2nd in Boys 1600m Aztec Invitational Mar 05, 2018
Boys 1600 Finals Section 3 Aztec Invitational Mar 04, 2018
Boys 3200 Section 2 2nd Richard Thompson South Mountain Classic Feb 26, 2018
Aksel, Habs, Reece Sweep Boys 3200m 2nd Richard Thompson South Mountain Classic Feb 25, 2018
Boys 1 Mile Finals Section 1 UW High School Invitational Feb 09, 2018
Boys 3K Finals Section 1 UW High School Invitational Feb 07, 2018
Tweets by MileSplitAZ