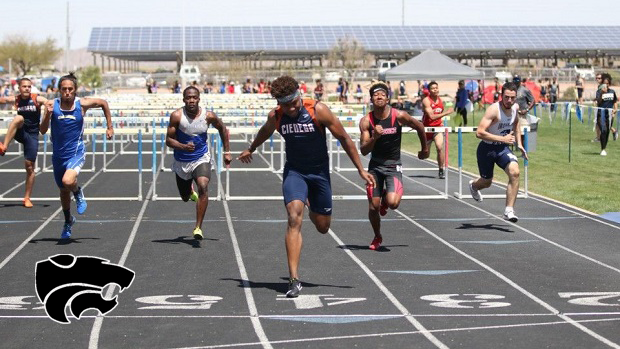 Ten Athletes to Watch at the Southern Arizona Championships

Tomorrow is the Southern Arizona Championships Track Meet held at the Mountain View High School in Marana, Arizona. All week we've seen athletes from the phoenix area tearing up the State leaderboards. Tomorrow, many of the top track and field athletes from Southern Arizona will play their hand to not only to show what they can do in their respective events, but to earn one of the coveted spots at the State Meet. Here is our list of 10 of the top athletes to watch at the Southern Arizona Championships.
1. Neysia Howard (Tucson Magnet, Sr.)
Neysia is currently the top Senior in the State for the 100m and the 200m. This week she will focus on the Long Jump which will be pretty stacked on both the boys' and girls' side. Neysia holds a PR of 19-4.25 in the event and her toughest challenger will be Mia Corners from Gila Ridge.
2. Mia Corners (Gila Ridge, Jr.)
Mia finished 3rd at the State Meet last year in the Division II Girls' Long Jump competition with a 19-0.25 jump. Her season best mark has been 17-4, which she jumped last month at the YUHSD Championships. Can Neysia and Mia help each other and push each other to reach further tomorrow?
3. Andy Ference (Salpointe Catholic, Sr.)
Andy is the State leader for the Pole Vault and currently ranked 6th in the country, with a mark of 16-8. Recently he took 2nd at the Arcadia Invitational against Sondre Guttormsen. Tomorrow he will compete in the pole vault as well as the 400-meter dash.
4. Trayvion White Austin (Sahuaro, Jr.)
Trayvion will be the overwhelming favorite in the Boys' 200-meter dash with his 200m PR of 21.77. The Boys' Long Jump contest between him and Cienega's Jamarye Joiner will be one of the more interesting events as their PRs are within an inch of each other and ranked 3rd and 4th in the State, respectively.
5. Tony Torres (Ironwood Ridge, Sr.)
In the boys' middle-distance races, we'll see some interesting matchups with Tony Torres racing Cody Hartman (Gila Ridge, Sr.) in the 800 and Daniel Marquez in the 1600m. Tony has a PR of 4:26.90 for 1600m and his 1:57.07 performance for 800-meters is ranked 6th in the State.
6. Daniel Marquez (Gila Ridge, Sr.)
While Daniel ran a PR of 9:24.54 for 3200m at the Chandler Rotary last month, he'll be looking forward to racing some tough competition for 1600m at Marana Mountain View including Torres and his Gila Ridge classmate Cody Hartman.
7. Jamarye Joiner (Cienega, Sr.)
Jamarye is ranked 5th in Arizona for the 110 hurdles and 4th in the Long Jump. Along with Trayvion White Austin he'll be vying for the victory in the Boys' Long Jump but could we see some breakthrough performances from both of them at Marana Mountain View High School?
8. Gabe Martin (Empire, Sr.)
Keep an eye out for Gabe Martin's high jump performance tomorrow. Gabe is ranked 2nd in Arizona with his lifetime best mark of 44-6.5!
9. Ana Alvarez Tostado (Salpointe Catholic, Sr.)
Ana and her teammate Zoey Delgado head the Lady Lancers' distance squad in Tucson. Ana ran a PR of 5:17.40 for 1600m last week at the Hal Anders Invitational, and will also be the overwhelming favorite in the Girls' 3200.
10. Zoey Delgado (Salpointe Catholic, So.)
Meanwhile, Zoey has run 11:12.87 for 3200m she will likely be shooting for a sub-5:20 pace at Marana Mountain View. How fast will they push each other tomorrow?
Tweets by MileSplitAZ