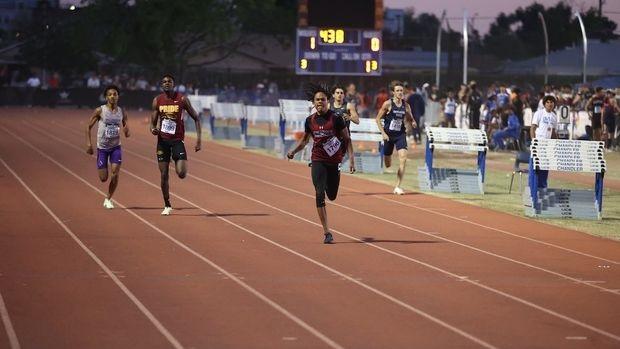 State Editor Logan Stanley previews the meet -- who and what to watch for in Division II.

The 100m figures to be one of the more entertaining races at the state meet as nine athletes come in having run under 11 seconds. McClintock senior Prince Conteh is the top seed at 10.75 with Gilbert senior Marcanthony Sanchez (10.77) and Youngker senior Steven Williams (10.80) close behind. Conteh is the slight favorite to win.

In the 200m, McClintock junior Avaunt Ortiz looks to continue his strong season and take home his first state title. Ortiz leads the entire state with his 21.61, which was run in a headwind of -0.2 at the Tempe City Meet last month. Ortiz's teammate, Conteh, is the second seed at 21.83. Williams (21.92) and Cienega junior William Starnes (21.97) look set to fight for the last podium spot.

Switching to the hurdles, Buckeye Union senior Zachary Taylor is the only athlete entered who recorded a sub-15 second 110mH. Canyon Del Oro sophomore Rowan Barney (15.07) and Casteel senior Tagang Bawa (15.08) are extremely close and should be slugging it out for the last two spots on the podium. In the 300mH, Paradise Valley senior Erick Reyes (39.82) is the only seed who has run under 40 seconds. There a slew of athletes -- McClintock senior Anthony O'Neal, Campo Verde senior Gavin Parks, Gilbert sophomore Vance Nilsson, Sunrise Mountain senior John Muller and Cienega junior Alex Garcia -- who are within .60 seconds of each other.

The 100m is set to be a showdown between the Onyepunuka sisters from Agua Fria -- sophomore Stacey is the top seed at 11.93 while the junior Sabatiney is in second at 12.12. North Canyon junior J'Neya Hill is not to be overlooked with her 12.14. But the Onyepunuka's are the favorites.

In the 400m, the top seed is owned by North Canyon senior Treasure Rinaldi at 56.97. Rinaldi's teammate, Texas A&M commit Joy Moorer, owns the fastest time in the state with her 55.54, but has opted to focus on the hurdles at the state meet. Ironwood junior Jasmine Haskell (57.47), Campo Verde sophomore Lea Spindell (57.92) and Hill (58.27) will all be in the mix for a spot on the podium. The Onyepunuka sisters are also entered in the event, and can never be counted out considering their top-end speed.

The hurdles will be a battle between two of the state's top athletes. Williams Field Saira Prince leads the entire state with her time of 14.18 in the 110mH. Moorer is a bit off at 14.93, but possesses the more acceleration than the rest of the field. Those two are the only ones in the division to have gone under 15 seconds. The 300mH is Moorer's forte, where she has run 41.99 and is ranked No. 11 in the U.S. for the event. Prince is the clear second seed at 43.26, with the third seed, Canyon View sophomore Brooklyn Grizzell, coming in at 46.19.

The 800m also looks to be one of the more exciting races at the state meet with the top two seeds -- Ironwood Ridge senior Matt Pueschner (1:53.28) and Horizon sophomore Donovan Bitticks (1:53.51) -- only separated by .23 seconds. Gilbert senior Terrence Keyes (1:54.57) is also one of the state's top 3200m runners, so he's a name to watch for as well. Catalina Foothills junior Brandon Martz and Ironwood Ridge senior Logan Marek should be also be in contention.

The 3200m is a clear battle between two athletes -- Marek and Keyes. Marek has run the faster 3200m this season, a 9:00.61 at the Sundown Track Series #1 back in late January. But that race was run unattached, so that doesn't count in terms of AIA rankings. Keyes ran 9:01.93 at the Arcadia Invitational while Marek ran 9:02.00, so Keyes is seeded slightly higher. It will be a race against the clock -- can either break the famed nine-minute barrier?

The 800m appears to be a three-person race. Sunrise Mountain senior Kaitlyn Kaye is the top seed at 2:13.57. Desert Mountain senior Mary Evans is second in 2:15.79 while Casteel senior Jadyn Herron-Jonap is third in 2:16.22. The only other athlete in the division, Millennium sophomore Laden LeBlond (2:19.65), who has gone under 2:20 in the 800m isn't competing in the event.

It's even more spread in the 1600m, with the top three seeds separated by 12 seconds. Flagstaff junior Mia Hall, one of the state's top distance runners, is painstakingly close to breaking the five-minute barrier at 5:00.34. Kaye is the second seed at 5:06.75 and Herron-Jonap is third at 5:12.67. LeBlond is just on the outside looking in at 5:12.96, so look for her to be in the mix for third place as well.

The shot put is led by Deer Valley senior Semajay James, who is third overall in the state with his mark of 54-11.5. Marana Mountain View senior Samuela Hala'ufia is the second seed at 53-10.5. James and Hala'ufia are the only throwers to have tossed over 53 feet in the division. James is the favorite to win. In the discus, Hala'ufia is the obvious favorite to win. Hala'ufia's throw of 188-7 is nearly 24 feet farther than the second seed (Flowing Wells junior Richard Legarra at 164-10), and is also the second overall in the state.

Like the shot put and discus, the field is also spread out for the javelin. Cactus Shadows senior Jacob Steward is the top seed at 190-6, which leads the entire state. He is the only athlete to have thrown farther than 190 feet. Desert Mountain senior Porter Sweet is comfortably the second seed at 185-11, with Buena senior William Stemler coming in at 167-11.

The shot put is headline by Verrado senior Harlie Medrano, who has led the state in the event for most of the season. Medrano is the top seed at 42-0. Williams Field freshman Camryn Hunter (39-6) and Millennium sophomore Erika Grossman (37-6) look to be fighting it out for second and third. In the discus, Campo Verde sophomore Brooklyn Montgomery is the obvious favorite to win with her state-leading mark of 147-4. Montgomery has nearly a 14-foot lead on the second seed (Medrano at 133-9).

The javelin is pretty spread out as well, with Cienega junior Aislin Martinez-Pompa's mark of 135-3. Martinez-Pompa leads by almost eight feet over the second seed, Desert Mountain senior Nicole Castillo (125-0). Casteel sophomore Maya Speh is the third seed at 122-2.

In the high jump, Williams Field junior Kyler Kasper (6-6) is the only athlete in the field to have cleared 6-5. Gilbert senior KJ Perry (6-4) is the second seed. There are five athletes -- Canyon View senior Jase Carrasquillo, Sunrise Mountain junior De'Mykal Anderson, McClintock junior Lawrence Monroe, Broome and Casteel junior J. Stewart -- who are all tied in third at 6-2.

The long jump is all Desert Mountain senior Quinton Patterson's to lose. Patterson, who recently committed to Arizona State University, is the top seed at 23.11.25. He leads the entire state in the event, and is the only athlete to have jumped farther than 23-7. A trio of Cienega teammates, seniors Jacob Broome (22-10) and Jace Boren (22-4) and sophomore Ari Dubin (22-4) should be be fighting for the last podium spots.

Sunrise Mountain senior Malachi Marshall is the favorite in the triple jump with his season best of 44-11. Desert Edge senior Jamel Jenkins (44-6.5) looks to be safe as the second seed, while Boren (44-1) and Marana senior Charles Ebunoha (44-0.5) should provide a good matchup for third place.

Similarly to the other field events, there's also gaps in the field for the pole vault. Lake Havasu sophomore Sylvan Osman is the top seed at 13-10. Nogales junior Shahean Simon is the second seed at 13-6 and Canyon Del Oro sophomore Rowan Barney is the third seed at 13-3. Those three are the only athletes in the division who have cleared over 13 feet.

North Canyon junior Gloriah Hussey is the top seed in the high jump with her 5-7. Ironwood Ridge junior Katie Cherrington is the second seed at 5-4. Then there are 10 athletes, all bunched up between 5-0 and 5-2, who will be aiming for one of the final spots on the podium.

For the triple jump, it's two-person competition at the top with a handful of athletes who will be fighting to get a podium spot. Casteel senior (37-2) is the top seed. Hussey is a few inches behind at 36-11.5. Then Centennial senior Isabella Ferguson (36-0.75), Thunderbird junior Isis Burden (36-0.25) and Campo Verde junior Bella Hofmann (35-11) are the third, fourth and fifth seeds, only separated by less than three inches.

The pole vault features both the top seeds, Cactus Shadow junior Karli Neff and Casteel senior Annie Murphy, tied at 12-6. There's a bit of gap until the third seed, Casteel junior Olivia Dillion, at 12-0. Those three are the only athletes to have recorded a mark of 12 feet or higher in the division.