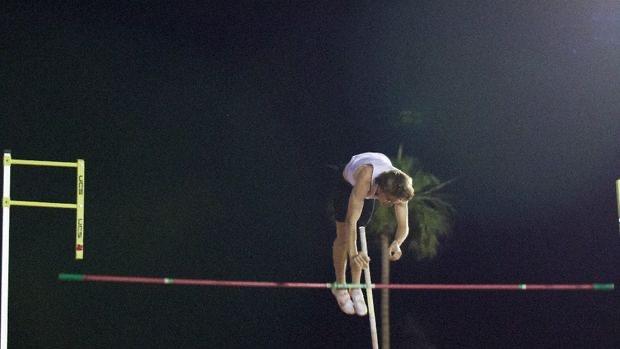 MESA, AZ. -- All season long, Valley Christian High senior Logan Kelley held the top spot among the state rankings for boys pole vault. So when this year's AIA State Track & Field Championships rolled around and Kelley -- who is committed to Ole Miss -- claimed his third consecutive title in Division IV with a mark of 16-6, there was nothing surprising about it.

The surprise came after the vault when Kelley revealed that he did so on a torn meniscus in his left knee.

"I hurt my knee recently," Kelley said he as discussed his third state title. "Last year at long jump, I tore my meniscus [...] I injured it again last meet, and tore it again. So, I have to get surgery May 26. It doesn't hurt that bad, but I don't want to make it worse. Decided surgery was the best way to go."

As Kelley mentioned, it's not the first time he has dealt with this injury. He also sustained the same one at The 2021 AIA State Track & Field Championships during the long jump. There was no surgery done after that.

The meniscus is shaped like a C and sits as a cushion between your shinbone and thighbone. A torn meniscus is considered one of the more common knee injuries in athletes as it usually results from forcefully twisting or rotating your knee. Athletes have been known to play through the injury in the past, but the risk for a larger tear increases.

That's why Kelley is opting to go under the knife.

"With the surgery,  I have a three month recovery," Kelley said. "Six weeks on crutches. Then after that, another six weeks until I can start fully running again. But that's pretty much the recovery process. I'm also getting some mouth surgeries done. Tonsils out, and maybe wisdom teeth."

You can watch Kelley talk about winning the state title and his knee injury in an interview here: