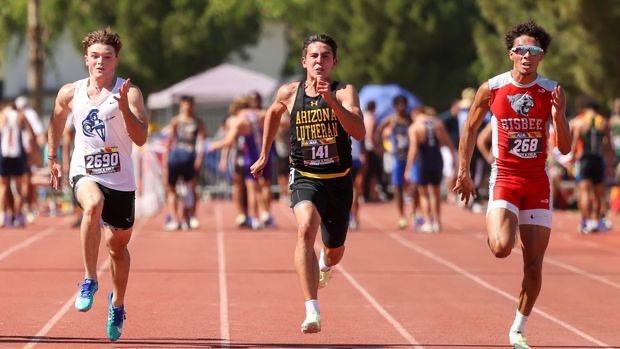 But speed and talent aren't determined by what division you are in. Arizona Lutheran Academy senior Jacob Holguin is a perfect example of this.

Arizona Lutheran Academy, located in Phoenix, boasts an enrollment just under 200 students. Yet, despite the small sample size, Arizona Lutheran produced one of the state's top sprinters in 2022.

Holguin proved that it doesn't matter if you're Division IV or Division I -- fast is fast. At The 2022 AIA State Track & Field Championships, Holguin ran 10.78 in the 100m to win the Division IV title. Out of all the 100m winners from the state meet, Holguin's time was tied for second fastest regardless of division (behind Division III champion John Ruvo).

A few hours later, Holguin did something he had never done before in the 200m -- break the vaunted 22-second barrier. In his last race ever in an Arizona Lutheran uniform, Holguin -- who will be competing at Grand Canyon University next year -- ran a personal best of 21.98 to win his second state title on the evening.

"Well I know right now that not a lot of people are under 22 [seconds], maybe like six or seven of us," Holguin said. "And for a Division IV person to do that, put that with my 100 meter dash, it's pretty impressive."

You can watch Holguin break down his state titles and reflect back upon his high school career here in a post-race interview right here: