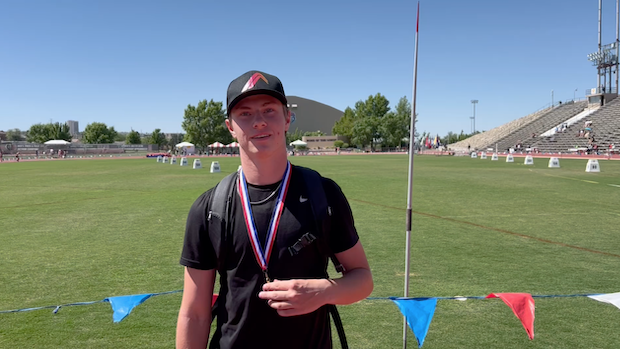 Desert Vista sophomore Hayden Gorovitz after his win in the javelin at the Great Southwest Classic at University New Mexico in Albuquerque.

ALBUQUERQUE, NM. -- Headed into the 2022 track and field season, Desert Vista sophomore Hayden Gorovitz main focus was on baseball. Three months later, and it looks Gorovitz will have a new sport on his mind as he is now the top javelin thrower in the state of Arizona following his win in the javelin at the Great Southwest Classic at the University of New Mexico in Albuquerque.

"It feels really great," Gorovitz said about his victory. "I'm here with Charles [Borowsky], one of my friends from Chaparral ... we threw not our best today, obviously. But, it was great competition throughout the whole entire lineup -- so it was great. First time out of state for a jav event, I mean it's all I can ask for. The atmosphere around me, getting some energy."

While Gorovitz's winning throw of 184-04 at Great Southwest is a bit off his personal best, it is a culmination of what has been a breakthrough spring for the sophomore.

Gorovitz started out the season at 162-9.5 at the end of February. He worked his way up all the way to 179-9 to finish second at the Southwest Javelin Showcase in late April. Gorovitz proved his rapid ascension was no fluke two weeks later at the AIA State Track & Field Championships when he claimed the Division I title in the javelin at 177-6.

But the real Eureka moment came last week at the USATF 15-16 Arizona State Championships at Mesa Community College when he launched a huge personal best of 196-03 to win the meet.

While technically the outdoor season is finished in Arizona with the state meet completed, there are still athletes competing in postseason meets. The top throw at the end of the season was 190-06 from Cactus Shadow senior Jacob Steward.

So, Gorovitz -- as a junior -- will enter next season as the state's top javelin thrower. Considering where he started the year out at, Gorovitz has put together quite an impressive spring.

You can watch Gorovitz talk about his win at Great Southwest Classic as well discuss his sophomore season as a whole in this post-competition interview right here: