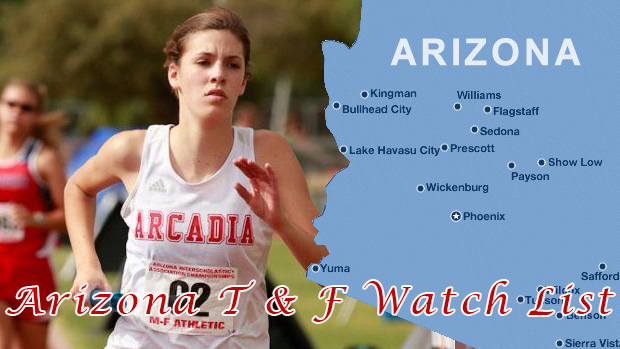 I first got involved in 7th grade when I participated in middle school track running short distance. I only really started getting serious when I joined the high school track team freshman year and decided to try long distance.

Coach will usually make Monday, Wednesday, and Friday hard days. That can be anything from twelve 300s to six 800s. On Tuesday and Thursday we will do some sort of recovery run, pyramid, or ladder. I won’t usually run over the weekend, unless you include meets.

I just want to be proud of myself when it’s all over and be able to look back on my high school track career knowing that I did my best. The mile is still completely new to me, so I’d like to see how much I can improve my time. Plus, it would be awesome to get below a 2:20 for my 800.  I’m also looking forward to getting a 4 by 8 team together and possibly winning a medal. We were really close last year and I think we have an even better chance this season.

I try to stay super relaxed the day of a race, even seconds before the gun goes off. Putting too much pressure on myself doesn’t help either. As far as superstitions go, I used to wear a certain pair of red socks for every race, but I wore those out. I don’t know if this is a superstition, but I always end up wearing a black sports bra for races. I also drink a ton of water the day of a meet and will usually end up going to the bathroom sometimes mere minutes before a race because I’m worried that if I won’t it will affect how I do. I’ve cut it pretty close a couple of times.

You may be competing alongside your teammates or other runners, but at the end of the day it’s all about you. Try not to focus on or compare yourself to anyone else. If you make it a goal to beat yourself, instead of making it a goal to beat others, you’ll find yourself closer to the top. You’ll also get a lot more out of the whole experience.

During my first year of track I had the opportunity to compete alongside Tess Berghoff, a senior on my team. She was super talented and a huge motivation when it came to improving my 800 time. She was also the reason our 4 by 4 team won state that year. My coach, Coach Reniewicki, is also a huge mentor. He’s the one who pushed me to try the mile for the first time last year.

My family, Tess, Megan R, and Kate B

Pasta the night before, peanut butter bagel with honey the day of

I’d say I’m definitely better at track, but I don’t think I can choose one over the other.

I’ve been playing The Weeknd’s album Kiss Land and Justin Timberlake’s album The 20/20 Experience nonstop in my car recently, so anything on those two albums.