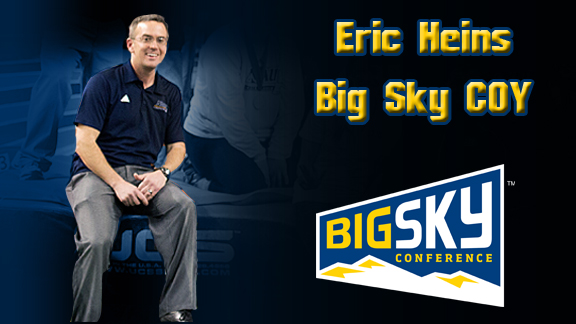 OGDEN, Utah - Northern Arizona University's Eric Heins has been selected as the Big Sky Conference Men's and Women's Indoor Track and Field Coach of the Year. The 2014 recipient was chosen in a vote by the league's coaches earlier this week.
Heins led the Lumberjacks to a sweep of the men's and women's titles this season. This year is the first season NAU have won both indoor titles since 2009.

The Lumberjack men won their 17th total indoor title, and third consecutive. NAU won the meet with a total of 130 points thanks to some clutch performances on the final day in Pocatello. The Lumberjacks beat out Sacramento State who took second with 89.5 points.

Matt McElroy led the way for NAU with 20 points. He won gold in the 3,000 meters and 5,000 meters. Teammate Tim Freriks scored 14 points for his team and Caleb Hoover had 13 points.

This is the eighth consecutive Big Sky title for the Lumberjack men between cross country, indoor and outdoor track and field. NAU has won every Big Sky men's title since the 2011 cross country championship.

The Lumberjack women captured the title by scoring 116 points edging out the Weber State women's 93 points. Paige Gilchrist and Alexis Clay led the way for the NAU scoring 16 points apiece for their team. Gilchrist finished second in both the 3,000 meters and 5,000 meters and Clay won the long jump and finished third in the triple jump.

This is the first indoor title for the NAU women since 2009 and the 11th total team championship. The COY award for the women serves as the first for coach Heins'.