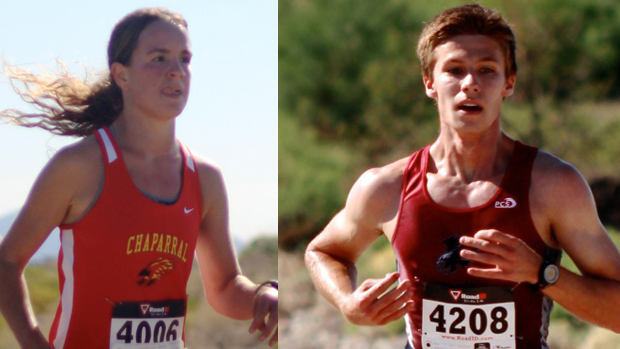 Last weekend at the 11th Annual O'Conner Invitational, senior Ali Kallner from Chaparral had a plan.

"I wanted to stick behind whoever was going to lead," Kallner stated after the race.  The only problem was - no one wanted to lead.

The race went out great for Kallner and Sandra Day O'Connor freshman Jessyln Bries as they broke away from the group at the mile mark.

"With 800 to go we (Kallner and Bries) were pretty much together so I just had to take off to create a little distance," Kallner continued.

"Jessyln is supper tough," continued Kallner.  "I thought she might fall back but she didn't.  I felt pretty good for most of the race - it definitely wasn't like Twilight were I was chasing the whole time.  This is the first time in a race I felt in control."

The course at Skunk Creek Landfill is typically a very tough course with hills scattered thoughout but changes were made this year and there was one very big hill at the beginning.

"The team win was great - this year our team chemistry has been so great and we are a lot closer.  We are deeper than last year.  I was really supper proud of my little sister Grace who was top ten in the race."

Kallner also had some exciting new to share.  Earlier this week she verbally commited to Colorado State University.  "I loved the coaches and the girls and I'm excited to be a part of the team because it's a super young team and it's building up.  I feel like I can contributel."

Andrew Miller from Ironwood High School won the boys Varsity race by taking an early lead and keeping it to the finish where the race became a little tighter.  Miller's time of 16:11.47 was 2 seconds faster than 2nd place senior Zane Pruedhomme from Shadow Mountain.