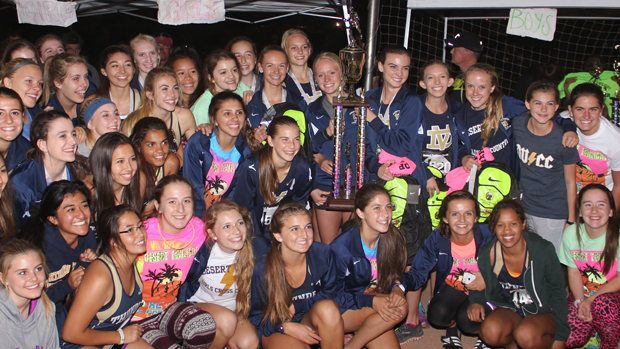 The weekly review is late this week because the results were not in the correct format and had to be re-done.  I finaly finished last night - phew!!

It appears almost everyone in Arizona was at the Desert Twilight XC Festival last Friday evening to check out the new course - and it did not disappoint.  It's difficult to say if the new course is faster than the old course but everyone running appeared to favor the new one.  There are still those fun dips - but only 2 - at the beginning and the end of the course and even though the course appears to be a little flatter, the sharp turns could add a few seconds to the time.

All in all the course is more spectator friendly and the finish line is wide and well lit with stadium lighting giving way to a more wide open feeling.

More importantly, the racing, especially the elite races, were the best ever witnessed on any twilight course.  The spectators were given a treat as both elite races came down to the final 20 - 30 meters.

The Twilight Meet was the first in-state race for both the girls and the boys teams from Desert Vista.    For the girls it was their third meet in a row with two weeks of traveling - once to California for the Woodbridge Invite where they placed 2nd and then to Oregon for the Nike Pre-Nationals where they also placed 2nd.

"If felt good to be in my own climate and to be on my home course," said senior Dani Jones after the race. "It's just good to be home for awhile."

The girls race went out fast and furious with Dani and Katie Rainsberger both hitting the 1 mile mark at 5:17 and the two mile at 10:55.

Rainsberger's strategy was to keep serging on the tight turns.  "I kept doing little 2 second surges after each corner," stated Rainsberger.  "It kind of tires people out when they have to keep catching up."

But Jones was right there on Rainsberger's shoulder the entire race until the final 30 meters when Rainsberger moved slightly in front of Jones.

Rainsberger won the race with a time of 16:41.62 (US#3) with Jones close behind in 16:42.98 (US#4).  Even with the loss Jones was all smiles after the race.  "I feel really good about my race," said Jones immediately after crossing the finish line.  "I've come a long way and I love knowing I can run with Katie and feel good mile after mile."

Traveling for two weeks can be really challenging.  "It's been a challenge even for me," continued Jones.  "A lot of girls on the team are really young and they handled it really well - I have been really impressed with them."

The team learned alot from the last three weeks and will be taking that knowledge forward as they prepare for State and the NSW Regionals on November 22nd.  Click here for meet page

Also showing some fantastic running skills in the Sweepstakes race were Canyon del Oro senior Bridgette Doucet, who was the third and final runner running under 17 minutes with a time of 16:55.95 (US#6), and Rio Rico sophomore Allie Schadler who was the fastest sophomore of the day finishing 4th in 17:26.02 (US#19). 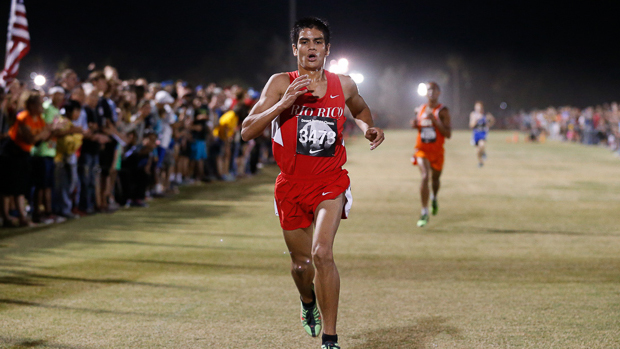 The boys race also went out FAST with a 4:40 first mile.  Corona del Sol senior Marcus Wheeler pushed the pace early trying to make sure no one stayed with him but Rio Rico seniors Carlos Villarreal and Oscar Amaya tried to stay as close to him as possible.  Tyler Day (Sr., Mesquite) stayed right with Wheeler as all 4 runners plus Nathan Thomas (Sr., Salpointe Catholic) hit the 2 mile mark at 9:42.

"The race went out way too fast," said Villarreal after the race.  "We started chilling out after the first mile.  I knew that if I could keep the leader withing 10 meters of me I could out kick them."

So with confidence in his kick and a plan "not to take the lead' Villarreal stayed with his plan and when he saw the dirt he knew the final 400 meters was just ahead of him.  "That's when I really started pushing the pace and when I went down into the dip I started to speed up and once I got to the final home stretch that's when I knew I had to go if I wanted to have a shot at catching him (Wheeler)."

And that's exactly what he did. 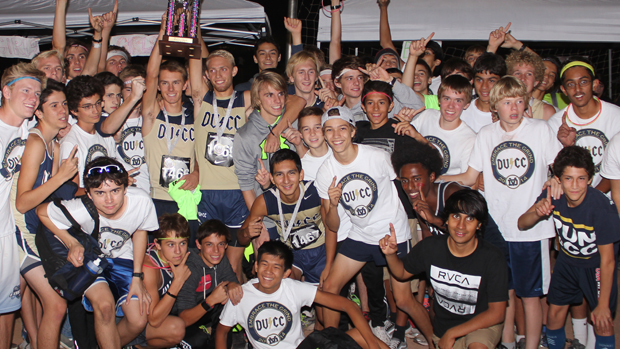 Junior Xavier Esparza was the first Desert Vista runner to cross the finish line taking 8th in 15:22.45 with senior Ben Davis right behind in 9th for 15:24.04.  Esparza and Davis led the Desert Vista boys to a stong 74 point finish over Texas team El Paso Eastwood with 104 points.  Corona del Sol finished 3rd with 186 points followed by Durango from Colorado with 187 points.

Also scoring for the Thunder were senior Kyle Havriliack in 20th with a time of 15:35.68 followed closely by junior DJ Harris in 21st (15:36.27) and sophomore Chris D'Angelo in 25th (15:43.12).  This was only the second time this season the DV Thunder boys ran as a full team with their first race being in California at the Woodbridge Invitational.

Photo gallery by Margot Kelly from the championship and sweepstake races at the 2014 Desert Twilight Classic on October 3rd.

You are cordially invited…

The Los Alamos Hilltoppers will be toeing the line at the Desert Twilight Invitational in Casa Grande, Arizona Friday Evening. Photo by Rod Stanopeiwicz.

Looking to hire photographers, videographers, writers, interviewers, twitterers and anyone else who can help make Arizona Milesplit the best it can be

We look ahead to the October 4th weekend ahead in the latest "Meets on Tap" with North Carolina drawing most of the national attention on Saturday with Great American and Wendy's, while the Desert Twilight Festival on Friday in Arizona will have a great individual matchup between Katie Rainsberger and Dani Jones with fast times expected. MileSplit will be doing it LIVE with a stream of Florida's largest meet in the flrunners.com Invitational, while the first state meet of the season will be up in the far Northwest with the Alaska state championships led by Allie Ostrander and Levi Thomet.

Some schools did not bring their entire team but we needed to include the team to be able to add the top individuals in the Sweepstakes Race.

Corona del Sol is still holding on to the 5K spot but Desert Vista has moved into the top spot for 3 miles.

PLEASE LOOK OVER THE ADJUSTED TIME SCHEDULE AS WE HAD TO ADD ANOTHER SECTION TO THE LARGE SCHOOL OPEN BOYS RACE....... THERE ARE NOW 3 SECTIONS!!!

First Look At The Nike/Twilight Course

Here is a first look at the new Nike/Twilight course.