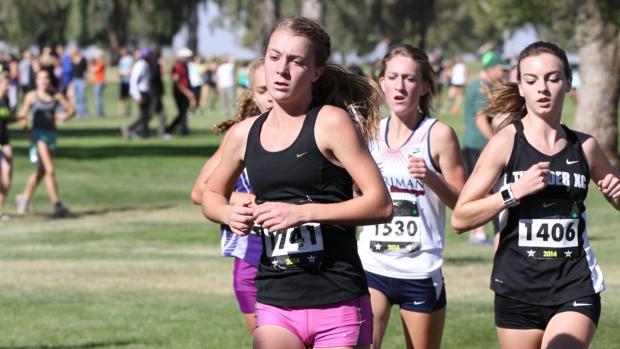 If I have learned anything in my first two and a half months as Content Manager for Arizona Milesplit it is that when Ron Smith or Jeff Guy start talking track in the state of Arizona it is worth listening closely to them. Jeff Guy texted me as I wrote this article telling me that the girls 1600m was the “best field ever assembled on Arizona soil." I think he is right, looking down the list of PRs of the girls slated to run you need to pull off your shoes to figure out how many of them have run sub 5:04! Having 14 girls under 5:04 is almost unheard of at a high school meet that does not purport to be some type of national championships.

The girl's 1600m field is headlined by no less than four Gatorade Runner of the Year athletes. The defending champion and probably the favorite in the field is Katie Rainsberger from Colorado. I can't help but type that with a slight smile on my face since the last time someone counted Dani Jones out she blew off the doors of the slow heat in the girl's mile at New Balance Indoor Nationals with the third fastest overall time on the day. To be clear I am not counting her out, but getting by Katie is no easy feat. If anyone is going to challenge Katie it will be Dani or the other two Gatorade Runners of the Year….Lucy Biles (Utah) and McKenna Morley (Montana).

After those front four Baylee Jones (Dani's sister), Bryn Morley (McKenna's sister), Bridgette Doucet, Allie Schadler, Alysa Snyder (Utah), Mason Swenson, Annie Hill (Montana), MiKayla Malaspina (Idaho), Alexis Nichols, Courtney Wayment (Utah), and Amanda Davis all look to set good times. While it would be unlikely for any of them to come out on top, someone wise once told me, “That's why you run the race."

In the 3200m, MiKayla Malaspina will take on another pair of strong local distance runners...Allyson Girard of Highland High School and Taryn Estavillo of Red Mountain High School headline the field. Jeff Messer coached athletes seem to always be making their way to the front of the pack, so Desert Vista's Kyra Lopez may factor in the race before all is said and done.

The 800m is slated to be round 2 of the mile. Lucy, Dani and Katie will be going at it again, at least according to the heat sheets. While the field is not as deep in the 800m it does feature North Canyon's Drianna Mustin who handily won the Husky Invitational last week. The favorite by virtue of being defending champion is Katie. Only a fool would count out Dani or Lucy though. If one or two of the top three stumble look for Drianna to be a dark horse contender. This should be a very exciting race to watch as well, especially if none of the big names scratch.

While all three girls distance races promise to be exciting, if you only come for one event make sure it is the girls 1600m. This event will have a field equivalent to many national championship field over recent years, except this race will be in your back yard. Heat sheets, schedules and more information can be viewed here!