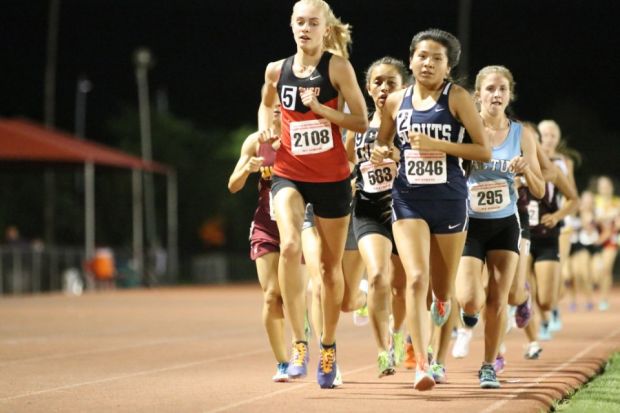 Day 2 of the AIA state championships for Divisions III and IV was very eventful to say the least. The extreme triple-digit weather did not affect the amazing marks that were hit by all of the day's state champions.

The day began early with the Division III and IV girl's javelin throw. The results throughout the Girls Javelin stayed rather consistent with very few lead changes. Alex Chee of Morenci High School took the lead on her first throw and improved upon it, getting a PR and earning a state title off of her second throw (91-08). The boy's javelin followed shortly after with less consistent results. Christian Kamerman, senior out of Valley Christian High School, took the early lead by a large mark. On the third round of throws, Daniel Arthur out of Benson High School threw the leading mark, passing Kamerman by a few feet. Before Arthur threw his leading mark, he threw two javelins out of the boundaries for his first throws. On the last round of throws, Kamerman was the last person to go. Disregarding any nervous feelings he had, Kamerman out-threw Arthur by about 10 feet, attaining the winning mark of 158-02.

Following the Javelin throw was the Girl's DIV High jump. Freshman out of St. Johns High School Brooke Patterson won her first state championship with a mark of 5-0. 2nd place to 13th all hit the same mark and had to be decided by other factors. After the DIV High Jump was Division III. Quintella Johnson of St Mary's High Schools won her 3rd straight state championship with a mark of 5-06.

The throws were quite eventful, having multiple winners rather than having one person sweep them. Megan Webster of Snowflake won the DIII Girl's Discus with a mark of 89-05. Tim Fitzgerald, state favorite, won the boys D3 Shot Put with a mark of 57-01.

The DIV pole vault was won by the state favorite Alexandria Goodson, the current state leader. Goodson didn't have to approach her PR to win the state championship, hitting a mark of 11-06.0. Marshall Donaldson of Round Valley won the Boys Pole Vault with a mark of 14-0, winning by six inches.

The girls 4x800m for DIV was a battle between Gilbert Christian, Scottsdale Prep, and Arizona College Prep. Gilbert Christian pulled away to take the win, finishing with a time of 10:09.09. Next up was the DIII 4x800m. The first leg was led by the favorites, Rio Rico. Chino Valley then took the lead, only to be passed by Salpointe Catholic with 2 laps to go. Allie Schadler of Rio Rico anchored the 4x800 and rallied a comeback to beat Salpointe Catholic with a time of 9:54.25.

After the girl's 4x800m finished up, the boy's DIV 1600m prepared to begin. The 1600 began with state-favorite Trevor Tam taking a tumble in the first lap. Little did everyone know, he would recover to win the 1600 with a time of 4:34. In the DIII 1600, Vaughn Jackson upset the division favorite Michael Barney in the last 200m in a thrilling finish. Vaughn finished with a time of 4:24.92, barely beating Barney's time of 4:25.43.

The boy's DIV 800m followed shortly after the mile. In the second lap of the 800m, multiple runners attempted to dethrone Trevor Tam but were unsuccessful in doing so. Tam won the 800m with a time of 1:59.71. The DIII 800m was won by Gamar Garem with a time of 1:57.29. Garem is only a sophomore, so expect to see him again over the next two years.

The day finished off with the girls 3200m. Meghan Barney showed everyone why she was the state favorite for the DIV 3200m, comfortably winning by over 20 seconds, hitting a time of 11:23.59. The DIII 3200m was the race to watch for day 2. Samantha Schadler beat the top-seeded Chamique DuBoise in a close race separated by only 14 seconds.

Congratulations to everyone that participated in day 2 of the State Championships.