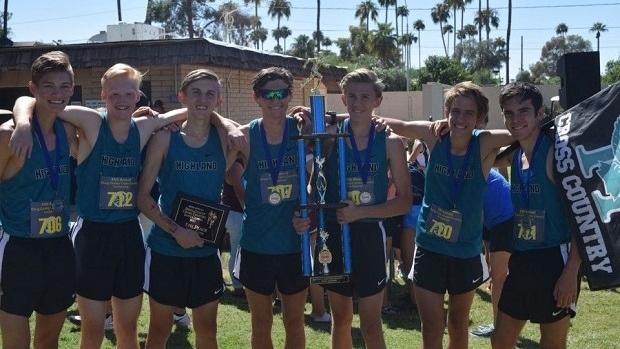 This weekend, the Doug Conley Invitational was anything but ordinary. Along with a new course standard and a race separated by 2 points, there were many surprising and impressive races that went on this sunny Saturday morning.
The JV girls were the first to run on the new course, kicking things off for the day. Both Xavier and Highland put on a show, putting their entire top 5 squads in the top 15. Xavier went 1-2-3-4 in the race, scoring a team total of 21 to win the open race. Similar to the girl's race, the Highland boys made a statement, scoring only 37 points to win the JV/Open race. Individually, Joseph Tryeman (Sr.) of Marcos De Niza High School won the race with a time of 16:22.
The next race was the invitational varsity boy's race. This race was much closer compared to the Open races, only being separated by 17 points. The Cactus Shadow boys took the team title with a total of 114 points. Fidel Del Los Rios (Jr.) of Carl Hayden High School ran a great race winning individually, being the only person in the race to break 16 with a time of 15:55.
(Below: Fidel Del Los Rios en route to victory in the Invitational Boys race.-photo by Harold Smith) 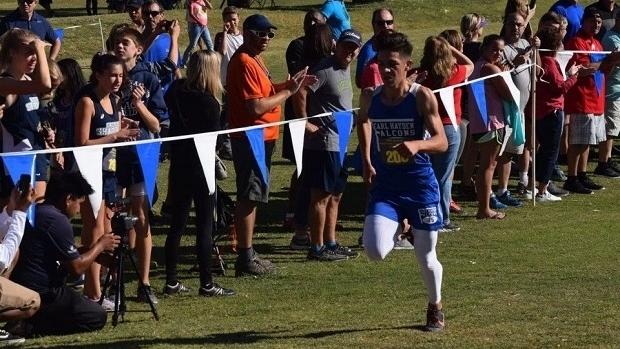 Following this race was the Invitational Varsity girls. Without Haley Wolf and the rest of the A-team, Desert Vista posted an impressive victory with the JV squad, winning as a team with a score of 120. Not far behind was Maryvale High School with 129 points. In a thriller for the individual title, Victoria Tenpenny (Sr.) of Page High School edged out Meghan Barney (Jr.) of Veritas Preparatory Academy with a time of 19:25. Barney finished just behind her with an official time of 19:28.
The Elite Varsity boys race followed shortly after, featuring a new course record along with many blazing fast times. Though it started as a close race, Anthony Haren (Sr.) of Perry High School pulled away from the crowd with a mile to go. Haren finished with a time of 15:15, but was disqualified because he was not wearing a bib. Bowen Martin finished not far behind with a time of 15:21, breaking the meet record as well as the course record. The Highland boys barely managed to edge out Page and Mesa Mountain View, scoring 100 points in total over Page with 101 points and Mountain View with 103.
(Below: Bowen Martin of Page HS leads Haren and Lewis in the Elite race.-photo by Harold Smith) 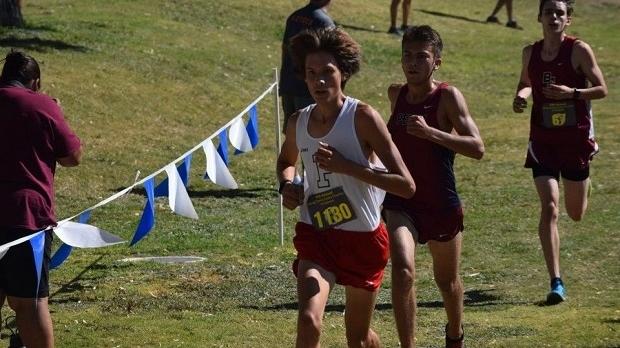 On the girl's side, the race was a bit more spread out. Abi Archer (Sr.) of Chaparral High School pulled away about a mile into the race and didn't look back, winning by about 9 seconds with a time of 17:46. Xavier's girls team came in first overall with a team score of 68, beating Highland by a mere 11 points. 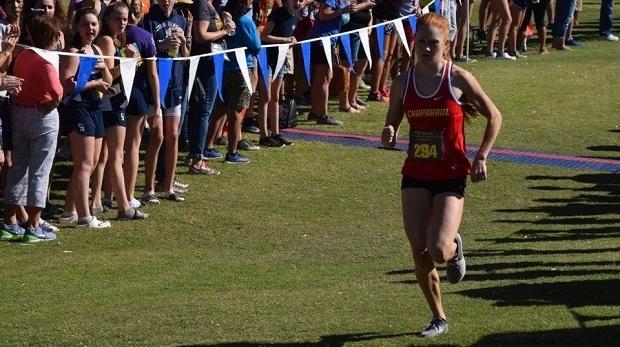 (Above: Chaparral's Abi Archer takes the win in the Girls Elite race.-photo by Harold Smith)
This year's Doug Conley Invitational came with many surprises and impressive times.
Tweets by MileSplitAZ