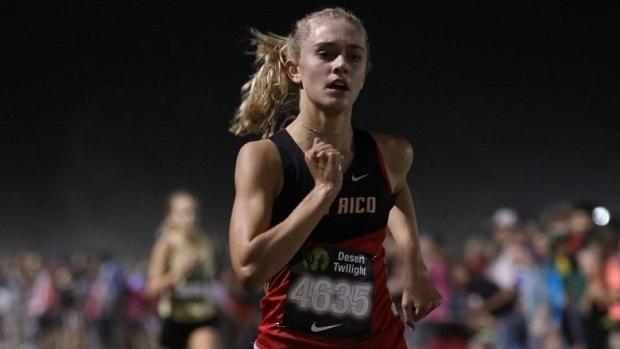 (Samantha Schadler entered Twilight as the top-returner and won the girls title in 17:13.-photo by John Hays)

Another memorable evening of performances at the Grande Sport Complex came and went for the Desert Twilight Festival with over two hundred teams and 6,000 high school athletes in attendance. Expectations have always been high for Arizonans when competing against out-of-State schools and where better to host such an opportunity than at a preview of a regional championship.

Things ramped for the Varsity races beginning with the Girls from Small Schools. Silver Creek's Cami Fischmann (So.) and Zoe Baker (Sr.) matched each other through the race until the final 400 meters when Cami Fischman kicked for home in 19:06.1. Baker followed soon after but was outkicked by Precious Robinson (Jr.) of Pinon in 19:13.1 to 19:13.2. Next up, Murrieta Valley continued the trend of a front leading duo, with Caitlin Billman (Jr.) and Arabella Reece (Sr.) working off each other. After two miles Billman cut loose to clock in at 19:01, and was followed by Reece in 19:21.8. Finally, in the Boys Large School Varsity Daniel Avila (Centennial, Sr.) and Fidel Del Los Rios (Carl Hayden, Jr.) broke the front pack with Avila edging out Del Los Rios in 15:59.3, the first sub-16 performance of the night.

In the Girls Championship race, Maya Smith (Northland Preparatory Academy, Sr.) relentlessly held the lead all the way to a new PR of 17:37, dominating the field by almost a minute. Her teammate and fellow Senior Keelah Barger finished 2nd in 18:32 ahead of Mary Gibbs (Cactus, Jr.) who clocked in at 18:36. Meanwhile the Bruins of Cherry Creek from Colorado, placed 5 of their girls within the first 30 of the field to overtake the Northland Prep Spartans for the Championship team title. In the Boys Championship race, Jacob Lewis (Boulder Creek, Sr.) also pressed the pace early to drop the field and come away with his first victory of the season and a new school record. Matthew Bradley (Prescott, Sr.) took 2nd also with a new 5k PR and while Reier Gilbertson (Sr.) led the Mountain Ridge Lions with a 5th place finish, like the girls, the boys of Cherry Creek came out on top over Mountain Ridge, with 122 points to 169.

Finally, all that were left were the Sweepstakes races which capped off the night, with very deep fields assembled with high caliber out-of-state runners and teams like Michael Abeyta (El Paso Hanks, So.) and El Paso Eastwood from Texas, Tatum Miller (Air Academy, So.) and Niwot High School from Colorado, and Lake Braddock from Virginia pitted against the best in Arizona including Samantha Schadler (Rio Rico, Jr.), Thomas Cain (Cibola, Sr.) and teams like the Chandler and Xavier girls and the Desert Vista boys.

In the Girls Sweepstakes race, a heavy peloton came through the mile mark in 5:42 with Schadler at the helm. She and fellow Arizonan and Haley Wolf (Desert Vista, Sr.) would pull away and battle it out through the third mile. Chandler's Morgan Foster (Jr.) steadily held 3rd, while Colorado sophomores Tatum Miller (Air Academy) and Madeline Burns (Durango) led the chase pack in 11:28. Schadler would ultimately overtake Wolf to clinch the Individual title in 17:15.8 to Wolf's 17:21.6. Over 20 seconds later, Foster would edge out Miller for 3rd place, and consequently lead the Wolves to victory with 127 points. Richelle Sandin (Catalina Foothills, Sr.) finished 5th in 17:46.2 and Durango's Madeline Burns (So.) finished 6th as the low stick for the Demons who took the runner-up team title with 182 points.

Finally, in the Boys Sweepstakes race, El Paso Eastwood's Anthony Molina (Sr.) and Gabriel Armijo (Sr.) led the charge for the Troopers in a pack of five with Michael Abeyta, Kashon Harrison (Kirtland Central, NM, Jr.), and Cole Sprout (Valor Christian, CO, So.) through the first mile. Harrison and Sprout then made their move eager to break 15-minutes and with 100m to go Sprout seemed to have an edge over Harrison. The KC Bronco from New Mexico found a final gear to meet Sprout's challenge and out-lean him at the finish. Thomas Cain placed 6th, as the first boy from Arizona, after running most of the race with only one shoe. Though Molina and Armijo finished 8th and 10th for the Troopers, Desert Vista finished with an 18 second spread across their scoring five runners. "It's really good to see everyone who's been with you all four years out on the course", said Desert Vista Senior Bryce Schmisseur. The Thunder 76 points emerged victorious from the race over their Texas rivals and previous Sweepstakes victors, El Paso Eastwood.

As the premier meet of Arizona cross country, Desert Twilight exceeded all expectations with athletes who stole the show, plowed through the course, and broke the hearts of their competition.