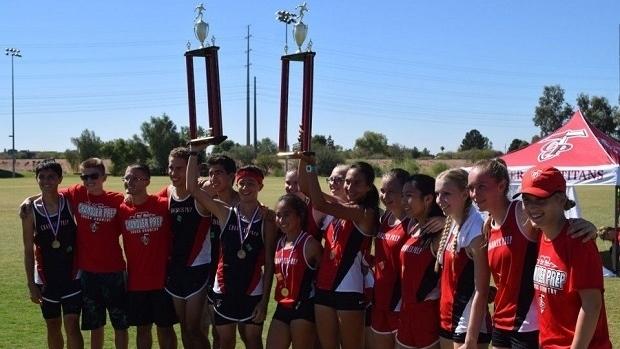 (Chandler Prep Swept the Small School Titles at their home meet on Friday.-photo by Harold Smith)

The 4th Annual Titan Invitational was held this past Friday at Crossroads Park, assembling 61 teams as the third largest meet in Arizona. With the meet split up between large school and small school races Titan gave participants an idea of the top contenders' fitness in the closing weeks of the season.
(Below: Stubbs [left] and Haren [right] battling it out in Large School Varsity.-photo by Harold Smith) 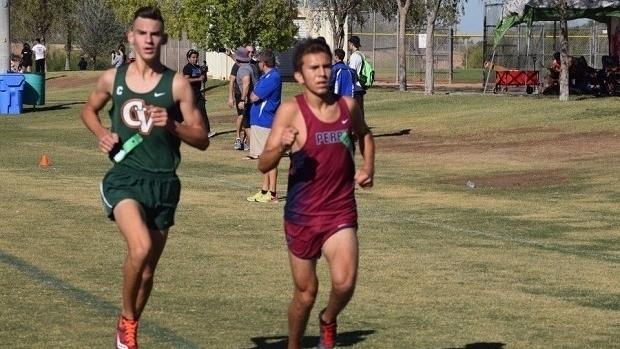 In the Large School Boys Varsity race, while the heavy hitters like Rylan Stubbs (Campo Verde, Jr.) and Anthony Haren (Perry, Sr.) strung out the field through the first mile, the Bronco trio of Drew Burns (Sr.), Jose Acuna (So.), and Anekin Hetman (Jr.) led the chase pack for the Broncos. Burns eventually caught up to Haren and Stubbs by the two-mile mark, and after rounding the dog park once more, Stubbs dropped the hammer to power through the remainder of the race to a meet record of 15:45. Meanwhile, Burns overtook Haren finish in 15:58 to Haren's clocking of 16:00. Hetman and Acuna came through for the Brophy Broncos to edge out the Corona Del Sol Aztecs for the Large School Boys Team Title by three points.
Then in the Girls Varsity race, Richelle Sandin (Catalina Foothills, Sr.) took an early lead just ahead of Alaina Kautz (Campo Verde, Sr.), Becca Taylor (Chandler, Jr.), and Kylie Miller (Perry, Fr.). Without looking back, Sandin blasted away to a meet record of 18:29, despite a tough block of training earlier that week. "It's a good boost of confidence. It's good to know that I'm in a decent spot before championships with times dropping much more than last year and since the beginning of the season," said Sandin about her confidence in fitness leading up to Titan. Kautz and Taylor took the next two places respectively, and super-frosh Kylie Miller cruised into 4th in 20-minutes flat as the low stick for the Perry. Together with her teammates Rylie Howey (11th, Jr.) and Kate Miller (17th, Fr.) the Pumas secured the Large School Girls Team Title with 94 points.
Next came the Small School races with Quinn Burdick (Seton Catholic, Sr.) stealing or more like repeating the show in the boys' varsity race. Although Burdick was the returning Small School Boys Champion, he had the fifth fastest time among those entered in the Small School Boys Varsity race and still came out on top Friday afternoon. Mark Wogan (Sr.) of the Saguaro Sabercats plowed through the last mile to finish second, while Kyle Shirley (Casteel, Jr.) took third, and Adam Whitehead (Arete Prep, So.) placed fourth. Meanwhile Chandler Preparatory Academy's Evan Balizado (5th, Sr.), Kyle Blunt (7th, Jr.) Griffin Calfee (10th, Jr.) James Cochran (11th, So.) scored 29 points between them, while Joe Briones (30th, So.) sealed the deal for the Titans.
(Below: Olivia Mountain took 1st in front of a home crowd on Friday.) 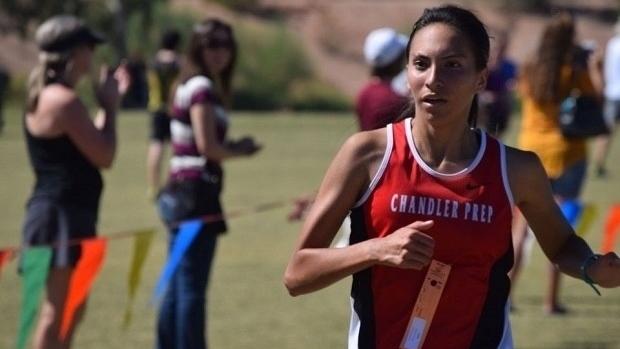 Finally, Olivia Mountain (Chandler Preparatory Academy, Sr.) closed out the Small School races in dominant fashion, opening a gap between her and the chase. Mountain took the victory in 20:35 while Abigail Washburn (So.) and Elizabeth Washburn (Sr.) finished 2nd and 3rd for Trivium Preparatory, followed by Kaitlyn Cochran (Valley Christian, Fr.). With the help of Justin Cooper (13th, Jr.) and Kelsey Gabriel (20th, So.) the Titans swept the Girls Team Title as well, with 83 points. Chandler Prep's Head Coach, Dean Ouellette said regarding their victory at home, "we knew that every place counted and to see them fight for every position they could all the way to the end makes you proud to be their Coach."
Tweets by MileSplitAZ