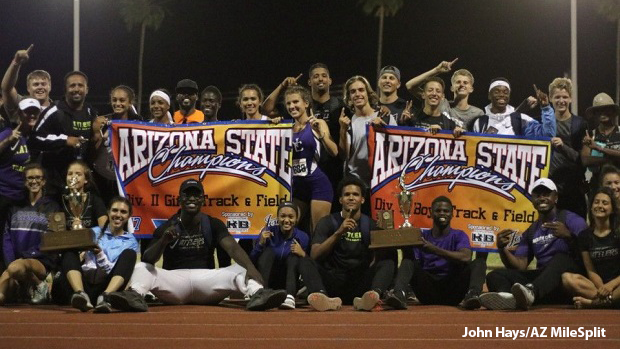 The Rattler Booster Invite will be a season opener for a few and for many it'll be a chance to showcase some range in other events before heading into Chandler Rotary next week. One thing's for sure: The North Canyon Rattlers are set to roll out some fast times on their home turf. Here's a list of the top five events to watch at Rattler Booster tomorrow.

Kelee Ringo (Saguaro, Sr.) is currently the fastest ranked boy for the 100-meter dash with a 10.75 from last week's Brophy AMDG Invite. This week he'll race the 200-meter dash with Stacey Boyd (McClintock, Sr.) who ran 22.29 for 200m as a sophomore. Charles Proby (Dysart, Sr.) will be another top contender with a PR of 22.26 for 200m from the Buckeye Lions Invitational. Proby placed 7th in the D2 Boys 400m at State last year. The Rattlers will be represented by Seniors Tanner Hagstrom and Soloman Enis. While Solomon was a State-Finalist in the 200m, Hagstrom will tackle it for the first time this season looking to go under 23 seconds.

Haley Wolf (Sr.) is another transfer to the Wolves who'll be making her debut in Chandler colors. Haley is the returning D1 Girls 3200m State Champ and holds a PR of 10:44.06. Wolf will contend with a few of Xavier's top girls like Jamie Stelnik (Fr.), Mia Olsen (So.), and Helen Innes (Jr.) who all placed in the top 20 among Division I Girls at the Cross-Country State Meet. Looking to mix it up with the D1 girls are Seniors Keelah Barger and Nora Blodgett from Northland Preparatory in Division IV. Barger was a D4 Girls bronze-medalist from cross-country State Championships while Blodgett has already run under 5:30 for 1600m.

For the throws, the Girls Shot Put will be the event to watch as Kiara Anderson (Dysart, Jr.) and Alaina Diggs (Millennium, Jr.) silver-medalists in the DI & DII Girls Shot Put respectively, from last year's State Championships toss the cannonball. Last year, Diggs won the event here with a mark of 38-08.5.

Check out the Heat Sheets