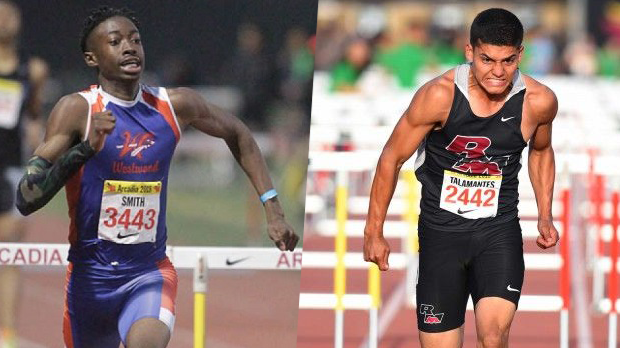 As the season winds down in the final weeks, athletes remain eager to extend their marks or shorten their times. Though the Annual Hohokam Invitational always assembles a highly competitive field at Westwood High School in Mesa, the non-stop gust of an April wind made things very difficult for Arizona athletes this weekend. Here's the rundown of what went down at the Hohokam Invitational in Mesa, Arizona.

Beginning with the throws, Alexis Jones (Queen Creek, Sr.) claimed the victory in the Girls Shot Put with a new PR of 44-7.5. Alaina Diggs (Millennium, Jr.) took 2nd with a PR of and Samantha Ponds (Chandler, Sr.) took 3rd with a mark of despite being sick earlier in the week. Desert Vista dominated the guys contests with Marcos Figueroa (Sr.) taking 1st in the Discus and Deshon Toney (Sr.) and winning the Shot Put. Their top girl Jaztyne Griffin (Sr.) also won the Girls Discus with a toss of 135-10. That afternoon, Carlan Naisant won the Boys' Javelin with a mark of 201-11, just over 2 feet away from his PR and State record. Keiley Sharp (Kofa, Jr.) won the girls' competition with a mark of 138-04 to tie for AZ #1.

Makel Hubbard (Higley, Sr.) won the Boys' High Jump and Triple Jump contests with PRs of 6-8 and 43-5.75, while Cierra Tidwell (Highland, Jr.) matched her High Jump PR tof 5-6 to win the girls' contest in 5-6. Kenashalee Kerr (Queen Creek, Jr.) jumped 37-04 to win the Girls Triple Jump competition in windy conditions over Chandler's Jai Gruenwald (Sr.) and Diamond Black (Sr.). After winning the Boys' 110m Hurdles, Johnie Talamantes (Red Mountain, Sr.) won the Long Jump competition by over a foot. Jillian Lombardi (Desert Vista, Sr.) won the girls' contest with a season best mark of 18-4, her first over 18 feet this season. Though conditions were less than optimal for the pole vault, AZ #1 Sevanna Hanson (Desert Vista, Jr.) was still able to win with a mark of 12'. On the other hand, Tyson Smith (Mesa Mountain View, So.) represented Mesa well with a vault of 14-03 to win the boys' competition.

Myreanna Bebe (Queen Creek, Jr.) flew through the Girls' High Hurdles in 13.98 seconds with some help from the wind. The guys race was presented instead with a cross wind, through which Mesa's top hurdlers Johnie Talamantes (Red Mountain) and James Smith Jr. (Westwood, Sr.) pushed each other to sub-14 second performances with Talamantes holding on for the gold in 13.88 over Smith in 13.95. Later that night, Smith returned to crush the intermediates in 36.69 for a new meet record in front of a home crowd! Sarah Marske (Mesa Mountain View, Jr.) won the Low Hurdles competition in 44.78. Her teammate Kennady Davis finished 3rd just a second later, while Karen Rivas (Kofa, Jr.) squeaked by to take silver in 45.27.

Jai Gruenwald (Chandler, Sr.) took the win in the Girls 100-meter dash in 12.18 over Hamilton's Morgan Parzych (Sr.) who finished 2nd in 12.24. Centennial's Kieran Clark (Jr.) won the hundred-meter dash in 10.85 while his teammate Dominique Hampton (Sr.) narrowly beat Sean Wray (Mesa, So.) both in 10.91. Dorian Nesby (Valley Vista, Sr.) secured victories in both the Girls 200m and 400m races. The two fastest times in the Boys 200-meter dash came out of the penultimate heat between Darius Glover (Skyline, Sr.) and Latrell Tellis (Chandler, Jr.). Though Tellis held an early leady over his competition Darius Glover closed the gap to win the race by .01 seconds.

Caroline McLeskey (So.) anchored the Highland Hawks 4x8 squad to a win by 13 seconds. Then in the Boys race, Noah Creighton (Sr.) held off Leo Daschbach (Highland, So.) to anchor Hamilton to a victory over the Highland Hawks. Later the Mountain Pointe 4x100m Relay team beat the Maricopa Rams in 42.26 to 46.62, while the South Mountain Lady Jaguars secured the victory in the girls' race over Queen Creek by .06 seconds. The Watermelon Relay 4x100m Relay competition lightened things up a bit before concluding with the 4x400s. Desert Vista won the contest in just 53 seconds with three javelin throwers. Highland overtook Xavier to win the Girls 4x4 in 4:05.03 to 4:06.21. Finally, after winning the Boys 400-meter dash, Desert Vista Senior Gabe Deutsch anchored the Thunder's 4x400m Relay team to victory in 3:22.63 over the Hamilton Huskies who finished in 3:25.79.
It was the final nail in the coffin for the Desert Vista boys to claim the team title with 115 points, while the Chandler girls went home with the team title with 100 points.