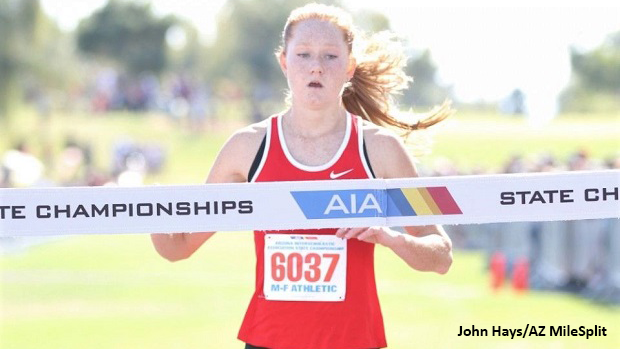 The Girls race started things off for Division 1 with Abi Archer (Chaparral, Sr.) coming in as the top returner from last year's race. "My race plan was to just 'stay relaxed and see what happens. I knew I was gonna' have pressure from Morgan and Caroline," said Archer. "I think I wanted to take the first two miles, stay smooth and maybe get a comfortable gap. On the second mile, that's when I knew I needed to go." Archer led the race from the front with Caroline McLeskey (Highland, Jr.) and Morgan Foster (Chandler, Sr.) staying close. Tiaree Towler (Chaparral, Jr.) followed close behind, determined to stay in the mix.
While Archer continued to widen the gap, Foster overtook McLeskey and distanced herself in the chase toward the Chaparral frontrunner. Archer held the lead and powered through to the finish in 17:56, now the 9th fastest time at Cave Creek Golf Course. "I think the most important thing for me was to knowing to relax and trusting in what I had done to prepare for today."
Foster took the runner-up finish in 18:04 with her fastest performance and her best career finish, at the State Meet. McLeskey held onto third place in 18:24 and Towler finished fourth for the Chaparral Firebirds in 18:46. Behind Towler, Mia Olsen (Jr.) and Jamie Stelnik (So.) had led the way for Xavier College Preparatory throughout the race, determined to secure the necessary points for the State Championship that had evaded them for the past six years. They placed 5th and 7th for the Gators with Kailey Welch (Mesa Mountain View, Sr.) finishing between Olsen and Stelnik. Kylie Miller (Perry, So.) finished 8th while her freshman teammate Taylor Lovell and Katy Clausen (Desert Vista, Jr.) rounded out the top-ten.
From the first mile of the race, the Gators held a dominant lead over the Chandler Wolves with all five of their girls just thirteen seconds apart among the top-twenty girls. Though Seniors Mihajla Milovanovic and Becca Taylor finished 11th and 12th for Chandler, they could not close the gap across their overall 1-5 girls spread to catch the Gators. Grace Valandra (Jr.) and Karina Hawkins (Sr.) finished 18th and 19th respectively and were joined at the finish area shortly afterward by Karina Smith (Sr., 22nd) and Sammy Braun (So., 23rd) for a total of 71 points which earned them the D1 Girls State Title.
Next: Sammy Leads the Thunder to pull off the upset over the Hawks.