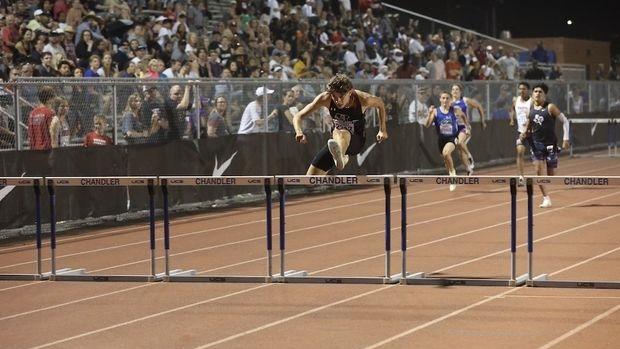 State Editor Logan Stanley previews the meet -- who and what to watch for in Division I.

The 100m figures to be one of the most enthralling races at the state meet, with 11 athletes who have run 10.96 or faster. Valley Vista junior Blaise Nelson (10.75) led the state in the event for a majority of the season, but Mesa Mountain View senior Matt Clark recently posted a 10.74 at the Mesa City Championships. Also in contention are Chaparral senior Davondre' Bucannon (10.78), Liberty senior Valentin Gbafore (10.79) and Chandler junior Andereya Nsubuga (10.82). These are the rest of the athletes who have dipped under 11 seconds:

In the 200m, which also figures to be another competitive race, Nelson is the favorite with his state-leading 21.72. Nsubuga is not far off in 21.77. Mountain Pointe junior Jayden Davis, one of the state's top 400m runners, is third in 21.85.

Davis will be doubling back for the 400m, where he is the top seed with a season best of 47.32. Liberty senior Jordon Guevara's time of 48.02 is the second fastest time in the division. A wild card name to watch out for: South Mountain senior Brian Fair Jr., who recently ran 1:50.12 to break the state record in the 800m. Fair Jr. is No. 3 in 48.09 and seems to be hitting his stride at the exact right time.

Over in the hurdles, all eyes are on Red Mountain senior Yan Vazquez. The UCLA-bound Vazquez has put together a stellar final season at the high school level with wins in the 300mH at the prestigious Arcadia Invitational and Mt. Sac Relays, setting a meet record at the latter. Vazquez's time of 36.40 in the 300mH is U.S. No. 2. He is aiming to break Robert Grant's state record of 36.24, set back in 2014. Vazquez is also the favorite in the 110mH with his 14.04, which leads the state. But, Chandler senior Khaymin Westbrook (14.26) is someone to watch for as a potential upset.

Freshman sensation S'Niyah Cade, another Chandler sprinter who has risen to stardom, is the top seed in both the 100m and 200m. Cade ran 11.71 to win the Chandler City Championships, but it was slightly above the wind legal limit at 2.3 m/s. She has also run a wind-legal 11.97, which is just behind Highland junior Lainey Jones' time of 11.89. Another name to watch for is Mountain Pointe senior Trinity Henderson, who has run a wind-legal 11.96. This particular battle between Cade, Jones and Henderson should definitely be a highlight of the state meet.

In the 200m, the field is a bit more crowded. Cade leads the field in 24.29, but she's barely ahead of Henderson at 24.30. Chandler senior Jocelyn Johnson (25.35) and Jones (24.39) will most certainly be in the mix as well. There are very well four athletes who could win this race. Cade's body of work this season gives her the slight edge.

For the 110mH, Corona del Sol Ena McMahon is the top seed and favorite at 14.27. Littlewood is second at 14.51, with Chaparral senior Neya Jamsion coming in at third at 14.53. Perry senior Avery Clark, fourth at 14.63, is the only other athlete to have run under 15 seconds.

The 300mH are led by Jamsion (42.34), and she has a 1.5 second cushion on the second seed, Clark at 43.98. Jamison is the obvious favorite. Mesa junior Elizabeth Wead and Chaparral junior Brooke Nordman appear to be set to duke it out for the final podium spot.

As mentioned previously, the 800m state record was recently broken by Brian Fair Jr. With Fair Jr.'s 1:50.12, the senior from South Mountain is obviously the heavy favorite heading into the race. Red Mountain junior Tyler Mathews (1:52.50) had led the state in the event for most of the season, so he will certainly be in contention as well. Desert Vista senior Gabe Parham, the third seed in 1:53.27, is also a name to keep an eye out for. This race is Fair. Jr.'s to lose though.

Moving up in distance to the 3200m, this race is all Jodon's. He has a 11-second lead over the second seed, teammate Johnathan Estrada (9:04.74 to 9:16.07). The intrigue will come to down to see if Jodon can eclipse the 9-minute barrier to become the 10th runner to do so in Arizona state history.

The 800m features two groups of athletes who are bunched up: leaders Pinnacle senior Gabriella Chiara (2:13.90) and Alona Haymore (2:14.07) are separated by just .17 seconds. The proverbial chase pack, Sandra Day O Connor senior Olivia Grayson (2:16.36), Perry senior Taylor Lovell (2:16.48) and Sandra Day O Connor senior Ellie Grayson (2:16.65) are only separated by .29 seconds. Chiara and Haymore at the clear favorites to win. Should be a mad dash to the finish, though.

It's been an interesting season for Desert Vista junior Lauren Ping, who just committed to Oklahoma State University. She by far has run the fastest 1600m this season with her time of 4:48.55. But that came back on February 26, and Ping hasn't run in the event since then. Ping recently competed in the 800m at the Desert Vista Last Chance at the end of April, running 2:24.86 to finish in fifth. Despite the long layoff and lack of appearances on the track, Ping is still the favorite to win based on her talent alone. Ping's teammate, senior Katie Sigerud, is the second seed at 4:56.68 and is the only other athlete in the state who has run under five minutes.

Like the 1600m, Ping hasn't competed in the 3200m since late February when she ran 10:49.73 at the Thunder Invite. And again, despite the limited amount of races, Ping is still the favorite to win. The question will be: can she ran faster than her personal best of 10:16.25?

Both the shot put and discus have been dominated this season by a pair of seniors from Chandler -- Isaiah Johnson and Amar Elmore. Johnson has a comfortable lead in the shot put with his mark of 58-0, compared to Elmore's 53-11.5. Corona del Sol senior Jalen Walker (52-3.5) and Mesa Mountain View senior Malaki Taa'ase (52-1) are the only other athletes who have tossed farther than 51 feet.

There's even a wider gap in the discus, where Elmore's throw of 190-5 at the Mt. Sac Relays pushed him to No. 7 on the all-time list for Arizona and is nearly 25 feet further than the second seed -- Red Mountain junior Trystan Gillis at 165-7. Elmore is the heavy favorite to win.

The shot put looks to be between two athletes, Hamilton senior Logan Bluetreich and Shadow Ridge senior Abby O'Connor. Bluetreich (40-6.5) has almost a two-foot margin on O'Connor (38-8). The pair are the only athletes in the division to have thrown farther than 37 feet.

In the discus, it's real close race between two sophomores. Shadow Ridge's Molly Link and Desert Ridge's Kaylee Landa are both tied as the top seed at 131-2. With No. 3, Basha freshman Juliana Garcia, a bit off at 123-9, Link and Landa should be the ones fighting it out for the title.

The javelin will most likely end up as one of the more enthralling events of the state meet with one of the nation's best, Basha sophomore Gabriella Garcia, competing. Garcia is currently No. 2 in the U.S. with her mark of 165-6. She'll be aiming to finally break the state record of 171-9, set by Chandler's Hannah Carson in 2011.

The hurdles are not the only event that Yan Vazquez excels in. Vazquez is tied for the top seed in the high jump at 6-8 with Brophy Prep junior Brennen McHenry. Corona del Sol senior Brett Wynn is right there with the top seeds at 6-7, with Chaparral junior Anthony Meng following close behind at 6-6. This event should also be one of the top matches at the state meet.

In the triple jump and long jump, a transfer from the East Coast has taken over as the division's leading leaper. Chandler senior Sir-Jonathan Sims, who transferred over from J.R. Tucker High School in Richmond, Virginia, has proved time and time again this season that he is one of the state's top jumpers. Sims is the top seed in both the triple jump (48-5) and long jump (23-7). And Sims is the favorite to win in both events, considering the closest that a second seed in either event is to Sims is five inches.

The pole vault has all the makings of a two-man battle. Highland junior Zach Bingham and Mesa Mountain View senior Connor Wilson are both tied for the top seed at 16-0. Bingham recorded that mark back in early April while Wilson recently did so at the end of April. The third seed, Wilson's teammate and senior Eason Hatch, is at 15-4. No one else in the division has cleared 15 feet.

With seven athletes all within two inches of each other, the high jump has all the makings of an enticing matchup. Sandra Day O Connor junior Chandler Miller, Avery Clark and Queen Creek junior Viann Vanderwall are all tied at the top at 5-5. Hamilton sophomore Kianna Reed and Pinnacle junior Alexa Hamilton are next at 5-4. And Queen Creek juniors Chole Bingham and Catherine Littlewood are tied at sixth at 5-3.

The long jump is a bit more spread out among the top three. Littlewood is the top seed at 19-9 and S'Niyah Cade is second at 19-4.5. Perry senior Brenna Rodriguez is the third seed at 18-7.5. In the triple jump, it's even more spread out. Rodriguez, the top seed at 39-5, has almost a foot lead on the second seed (Chaparral junior Clare Palin, 38-6.5). Rodriguez, who made the state meet in 2019 and 2021, is looking to claim her first state title.

There are three athletes who are relatively close in the pole vault. Beginning with Ena McMahon, also the favorite to win the 100mH, is the top seed at 12-2. Basha sophomore Jocelyn Phillips and Xavier College Prep senior Avery Allen are tied for the second seed at 12-0. Nobody else in the division has cleared 12 feet.