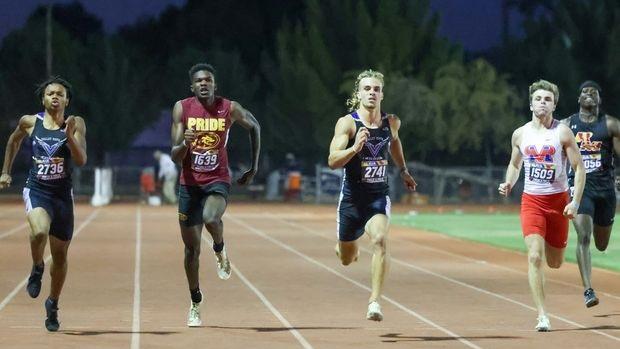 For somebody who only joined track to improve his skills on the football field, Valley Vista junior Blaise Nelson has morphed himself into quite a force on the oval as one of the state's top sprinters.

Nelson played a variety of sports as a child growing up in the West Valley. Baseball, basketball, soccer -- you name it, Nelson played it. It was in middle school when Nelson first played the game of football. Flag football was what he introduced first at the end of sixth grade before eventually moving onto tackle football the following year. Here, it was where Nelson decided what he wanted to do in life -- sports.

"That was probably a pivotal moment -- me getting into tackle football," Nelson said. "Me realizing that I loved it, realizing it was something that I could really pursue."

Early on in his sports career, it became clear to Nelson that he was a bit faster than his peers. He was always the one to win footraces with his friends.

That's not surprising when you consider his lineage. Nelson's mother, Shannon, was the 1993 3A state champion in the 100 meter hurdles at Winslow High School near Flagstaff.

"I like to think I get some of that speed -- some of that track knowledge from her -- because she did it in high school," said Nelson.

His first season on the track was his freshman year in 2020. Nelson ran a solid opener, posting a 11.68 in the 100 meters and 23.41 in the 200 meters at the Richard Thompson South Classic in late February. While he didn't run faster in the following meet the next week on March 7, the Husky Invite, Nelson felt he was gaining momentum toward a fast debut season.

Then, the pandemic hit. Competition was paused. Soon after, the whole season was cancelled.

Nelson spent the proceeding months just focusing on training. Since he didn't have physical access to a track, Nelson put in time running routes and doing footwork drills on open fields at parks by his house to prepare for football.

The training paid off in a big way for Nelson as he became one of the top receiving options for the Monsoon in the fall of 2020. Nelson averaged 71.8 receiving yards per game -- second on the team -- and scored five touchdowns -- also second on the team. He led the team in receptions at 51. All as a sophomore.

The stage was set for a breakthrough spring.

Nelson quickly proved that the speed on the football field was translatable to track. He ran 11.18 in the 100m to open up his sophomore season. Nelson would hover in the low 11's for a month before he had his moment at the Hohokam Warrior in the middle of April. There, Nelson ran 10.76 to finish in second --  breaking 11 seconds for the first time. Later on, Nelson won the 200m in 22.05.

This is really when Nelson asserted himself among the state's best, showing he could compete at a high level and was someone to consider when lining up at the starting line. Nelson had the chance to prove his worth the next month in May at The 2021 AIA State Track & Field Championships.

He made the final in the 100m as the youngest entry, running 10.81 to finish in seventh. A few hours later, under the lights, Nelson shined the brightest. Maybe it had to do with the familiarity of turning up the dial when the lights go on for football games, but Nelson was electric in the 200m. He ran an eye-opening 21.61 to place second, recording the sixth-fastest time ever in Arizona for a sophomore in the event. If there was any doubt before, it was removed then. Nelson had officially arrived as one of the state's top sprinters.

Nelson began his junior year right where he left off in the previous season, running 10.85 and 10.81 in the first two meets. The good vibes were rolling. Everything would come to a screeching halt though after a bad meal from a catering event left Nelson with food poisoning.
While he only ended up being a sick for a total of a few days, it was enough to throw Nelson off his rhythm. He ran 11.19 in the next meet at the Shadow Ridge Showcase on March 12 -- a respectable time for anyone, but not for someone with state title ambitions. With two weeks to go until one of the biggest meets of the year, the Nike Chandler Rotary Invitational, time was ticking for Nelson to get right.
He was able to recover in time, running 10.75 in the 100m to place second and a 21.72 in the 200m to place first against the state's top competition.
"It was a really good confidence booster," Nelson said. "It was telling me I could still get to that point. It was telling that I already obtained a better time than what I finished with in the previous year."

Nelson kept the positivity going when he ran 10.95 the next week before again running another 10.75, this time at at the Hohokam Invitational in early April. Headed into the state meet, Nelson was the favorite in both the 100m and 200m.

Unlike the previous season, it was Nelson who reigned supreme. He claimed titles in both the 100m (10.82) and the 200m (21.53), affirming his belief from the beginning of the year that he could be the one on top after coming close as a sophomore.