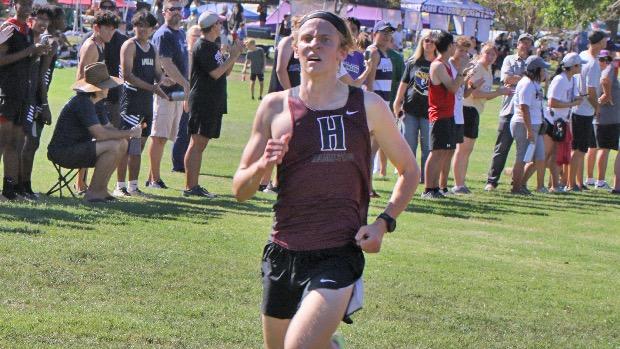 Hamilton's Andrew Gibby in the senior boys race at The Chandler Invitational at Tumbleweed Park in Chandler. Gibby ran the 5,000-meter course in 15:43.20 to finish in first place for his class. His time was also the fastest of the day out all of athletes.

CHANDLER, AZ. -- The high school cross country season officially got underway in Arizona with The Chandler Invitational held at Tumbleweed Park as a majority of teams competed for the first time in 2022, and Highland High quickly showed why they are one of the deepest squads in the state.

The first race of the day was won by Sunrise Mountain's Andrew Fastrup, who ran 17:06.60 to finish in first place. It is the first victory for Fastrup, who was also competing in his first high school race.

Despite it being the beginning of his career, Fastrup displayed some savvy tactics in his first race. He was happy to already achieve his season goal of dipping under the 18 minute barrier in the 5k.

"I'm feeling pretty tired, but great," Fastrup said following the race. "My plan was to not sprint at the beginning, but stay behind the first pack. Then, after that, try to stay with the front runners. And once I got to the last mile, I sent it."

The team battle was claimed by Highland as the Hawks (41 points) comfortably beat Red Mountain (125 points).

With the meet on a condensed schedule, the second race of the day was just one minute later. Quickly jumping to the lead was Highland's Camryn Delancey. She would keep that pace throughout the race en route to a first-place finish, running 19:01.40.

"I was hoping to win and go under 19," Delancey said. "I was close, but I just wanted to to push myself and get the first meet under my belt."

The team battle was won by Highland (29 points), who defeated Desert Vista (59 points).

In one of the fastest winning times of the day, Faith Lutheran's (Nevada) Logan Scott made sure to prove that nobody was near his level with a dominant effort. Scott ran 15:51.60 to finish in first place, a new personal best.

"I was staying right behind someone until the first mile because I didn't want to start off the race too fast," Scott said. "So I was just comfortable, right behind whoever was in first. And then once we hit that one mile, I just took off in my own pace."

And take off he did as Scott crossed the finish line a full 46 seconds ahead of second place -- Jack Bradley (Williams Field). The 46-second gap was the largest margin between first and second place out of all of the races. Chase Markunas (Hamilton), Nicks Nielson (ALA Gilbert North) and Ryan Estrada (Gilbert) finished off the top five.

Unlike the boys race, the girls race turned out to be one of the most enthralling of the meet. Saguaro's Evangeline Dunckley barely edged out Highland's Cloe Baugh, 19:11.50 to 19:12.00.

"I thought I was going to go out a little slow and then finish fast," Dunckley said. "But then everybody else was going out fast, so I went to the front. Pretty fast."

With the .60 seconds separating the two athletes, the race was the closest one for the day.

The team battle was won by Highland (31 points), with Red Mountain (63 points) coming in second.

In another fast race, Red Mountain's Matthew Hamilton put on a strong display with his 15:50.90 first-place finish -- also a new personal best. It took a late surge from Hamilton as Lee Williams' Wyatt Pickering held the lead heading into the last half-mile of the race.

"Lots of strenuous workouts," Hamilton said. "Summer mileage was 38 to 40 miles a week, so that helps."

But this race was a little closer than the prior one as Seton Catholic's Zachary Albanese ran 15:57.80 to come in third place. Lucas Witcher (Highland), Wyatt Pickering and Timothy Willford (Highland) finished out the top five.
Highland (34 points) easily won the team battle, defeating Desert Vista (122 points).

Sunrise Mountain's Madelyn Palmer wasted little time showing that she is among the state's best as she sprinted to front pack at the start, stayed with them through the first mile, before going out on her own and crossing the finish line in 19:15.40.

"It feels pretty good," Palmer said about the win. "I definitely wasn't going to go out like super hard if I didn't have anyone to push me today. But my mentality through the race was just to pick it up each mile. I think having the first mile be lead [by] someone really helped."

It was one of the last races of the day, but it was also the quickest one. Hamilton's Andrew Gibby ran 15:43.20 (AZ No. 1) to come in first place. Methodical racing paid off for Gibby, who deployed a devastating kick to claim the win.

"My goal was just to slowly get up there with the lead pack, latch onto them, see if anybody made a break -- if they did, I would follow. If they didn't, just stay with them for the last probably 800 [meters]," Gibby said. "I didn't want to feel cocky, but I had a good feeling I might have a good kick on them."

Gibby certainly did as the lead pack was bunched up within a second of each other with about 800 meters left in the race. But Gibby was able to extend that lead as the second-place finisher (Martin Breinholt, Campo Verde) came in five seconds behind at 15:48.30. Austin Reuff (Highland), Josh Howard (Highland) and Lucas Grunden (Paradise Valley) finished out the top five.

The final race of the day, also the hottest temperature wise with the thermometer at nearly 95 degrees Fahrenheit, featured a battle between some of the state's best runners: ALA Queen Creek's Evelynne Carr, Highland's Emma Baugh and Perry's Alexis Pagel.

It was Carr who came out victorious, running 18:57.40 to finish in first place.

"The second I got into the race, I felt the heat," Carr said. "I wouldn't say that in the race I'm the most positive-minded person. But I just wanted to stick with the pack in the front -- that's what kept me going. I was slowly trying to pass one girl after another. Around the 600 meter mark, that's when I got ahead and right on the hip of the front girl, and we started to pull away from the group. And I knew I wanted to stay there."

Carr was able to pull away from Baugh and put some distance between the two, with Baugh finishing in second in 19:13.20.