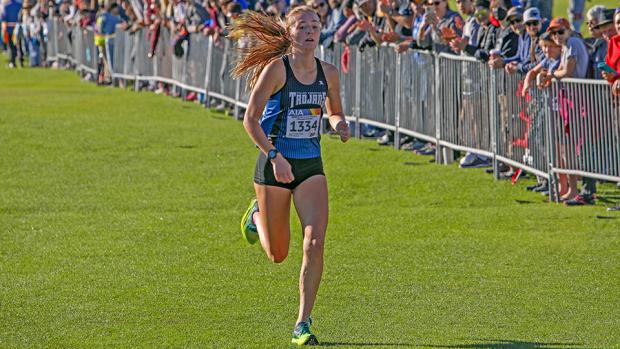 Valley Christian senior Lauren Ping in the Division IV race at The AIA State Cross Country Championships at Cave Creek Golf Course in Phoenix. Ping won the race in a time of 17:53.2.

PHOENIX, AZ -- As she came up the final hill on homestretch of the Cave Creek Golf Course at The AIA State Cross Country Championships, Valley Christian senior Lauren Ping reflected on the past.

It was a surreal moment for the senior, who has accomplished a lot since her first season at the high school level.

Four years later, Ping has cemented herself as one of the best athletes in Arizona prep history. Ping won the Division IV race in 17:53.2 on Saturday, claiming her fourth consecutive individual state title in cross country.

"I feel super blessed to be able to do that," Ping said. "Just coming down the finish line, thinking back to the freshman in me was a crazy moment."

After battling injuries in the spring during track and approaching this fall with a delayed start, Ping -- who transferred from Division I Desert Vista over the summer -- was pleased to walk away with the title.

Ping led the from start, jumping out to the front with a 5:41 first mile. Phoenix Country Day junior Kimi Cahoon, who finished in second overall at 19:28.5, came through mile one at 6:07.1.

"It's been a great cross country career," Ping said. "Obviously three years at Desert Vista, one year at Valley Christian. It's been amazing, all my experiences with my teammates. It's a great check off my goals for my high school career, winning state four times. It's just a great feeling."

Here are the rest of top 20 individuals:

While Cahoon didn't capture the individual title, she still walked away with a first-place medal as her second-place effort propelled Phoenix Country Day School to the team title. The Eagles scored 42 points to come out on top.

"It means everything to me, we work so hard in practice and to see it pay off is so rewarding," Cahoon said. "It proves that as a team we shouldn't be overlooked."

It is a rapid rise for Phoenix Country Day School, who won the first ever state title in cross country in school history after recently started up their cross country program at the school in 2019.

Glendale Prep Academy was a close second with 68 points. Sophomore Taryn Janssen came in fourth place at 19:43.9 to help lead the Griffins to a runner-up finish.

Northland Preparatory rounded out the top three at 88 points.