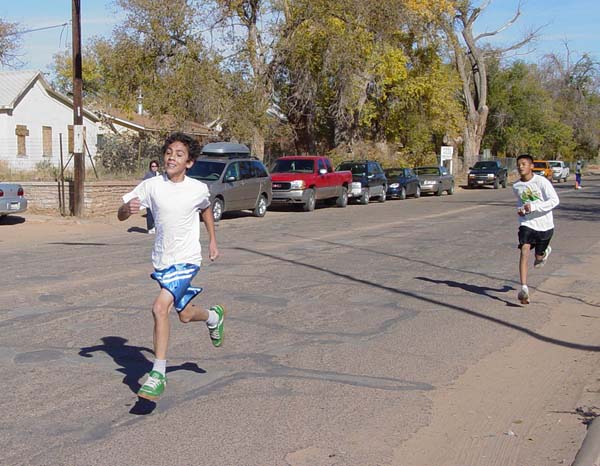 It all started with the Thanksgiving Turkey Trot in the 7th grade  when Billy Orman decided he wanted to win a Turkey for his mom.

The following year he joined the Tuba City High School Cross Country team and hated it, wanting to quit on day one.  But after his Dad encouraged him to give it 2 weeks to adjust, Orman hung in there and things started to turn around.

But he wasn’t finished.

Orman knew the potential was there to break both the 1600 and the 3200 records.  He set his sights on the Arizona State Meet.

Friday evening, day one of the State Meet, Billy Orman from Tuba City set out to try and break the 28 year old 1600 meter record set by Jeff Canada during his junior year at Greenway High School.  The temperatures were not ideal.

“Yesterday it was hot and a little windy,” said Orman after his 3200 race.  “It was the heat that really got me, it’s not quite that hot in Tuba City right now.”

After the race Orman became ill and had to be taken off the track and given fluids.  “I had a little heat illness or something,” he said.  “I got a headache and was pretty miserable.”

“I was thinking about the race yesterday and how awful I felt and I wasn’t sure I was fully recovered so I really didn’t have too much of a plan.”

Orman decided to run the first 400 and evaluate.

Orman ran the first 400 in 66 seconds and the meet announcer, Ron Smith, watched closely to see what kind of race he might be trying to run.

“I didn’t know what kind of race Billy was going to run after the 4:06 1600 Friday night but after watching his body language during his first 400 I felt as though he might be going for the record so I decided we all needed to help him out,” said Smith after the race.

When 8:48.63 popped onto the lap board the noise was deafening and the look on Orman’s face told it all.   He did it………..but he quickly acknowledged the help he got.

It really psyched me up!  I really benefited from their cheering.”

He was not the only one psyched up……….the race was the highlight of the meet!

“I feel great now,” he said after the race.  “The whole thing was difficult but I would have to say it was the 5th and 6th lap.  Those 2 laps always get me because it’s half way through the race and you still have another half left….I feel like this and I still have to do it all over again.  It’s more of a mental thing but I managed to overcome that and hammer it.”

Orman will run the Meet of Champions next Saturday and make a final attempt to break the 1600 meet record.  The race starts at 8:30 PM at Queen Creek High School.

Over the summer he will be hanging out in his home town of Tuba City before heading off to Harvard in August.

Orman now holds the Arizona State Record in the 3200 and the senior class record in the 1600.

One more to go!

Link to You Tube Video of 3200 Meter Run