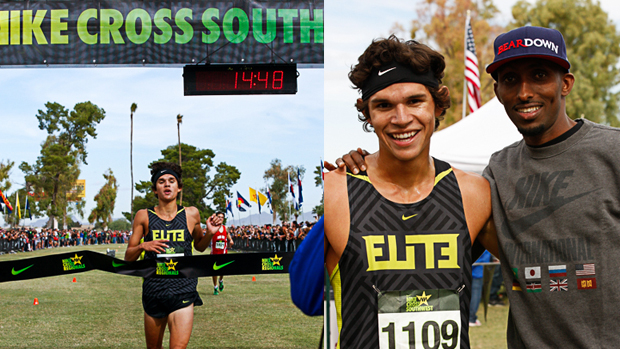 "This was the most memorable race I have ever run," said an elated Bernie Montoya (Cibola, AZ) after the race.  "It was a fun finish and I hope the crowd loved it."

Bernie Montoya and his coach, Kris Norton, had a plan, "We wanted to run to qualify," Montoya explained "but we got the win and that was icing on the cake."

The Toka Sticks course is flat and fast and Montoya was engulfed by a sea of runners as the wide start narrowed quickly around him.  "I was probably in 60th place at the start," said Montoya.  "I could see the lead pack but there were so many people around me I just got buried and had to slow my pace."

He made a few adjustments but stayed with the plan.  "The slower pace probably helped me a little bit more because I relaxed a little." 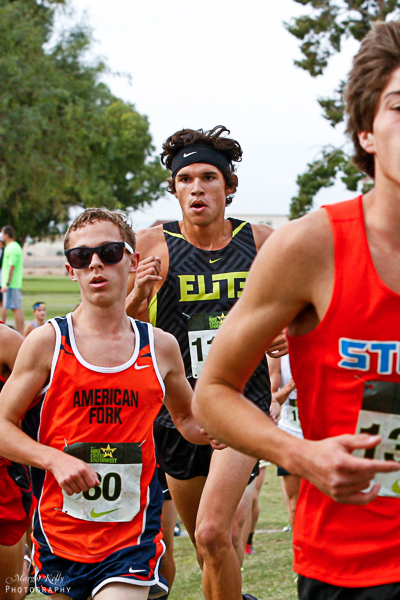 Montoya explained the rest of his race this way:

"I felt relaxed and I kept my eye on the guys in front of me.  I was trying to be conservative and I really like my finish so I just kept where I was.  After the 2 mile mark I saw Ben Saarel go and thought, 'this guy means serious business.'  I had to make my move because he had a good gap on me and I had to chase him down.  I saw Luis Martinez (Sue Cleveland, NM) on my shoulder and thought he was waiting for me to go.  Once I made my move he came with me. I started to think Ben had the race but when he looked back it gave me hope to keep going.  The closer I got to him the more confident I became. It was perfect timing when we met up with 150 meters to go.  It taught me to never give up."

"I know I made my coach nervous," he laughed.


After crossing the finish line Montoya turned around and shook the hand of every finishing runner.  It's a tradition he established after running his first cross country race at a dual meet in Yuma 2 years ago.  "I always wanted to shake the hand of top runners like Billy Orman and Brian Shrader…….runners I looked up to.  I have a lot of respect for all runners because they are doing the same thing I am doing and working really hard.  We share the same punishment in the race.  I just want to congratulate them."


Montoya heads to Nike Cross Nationals as the 3rd fastest returnee and one of the race favorites.  He finished 12th in 2011 and will have his eye on Nick Ryan (Fayetteville-Manlius, NY) who finished 5th last year and Jake Leingang (Bismarch, ND) who finished 8th.  Montoya also thinks Jacob Burcham can be a real threat but his summer training and his work ethic has gotten him to this final meet of the season and his plans are a little different.  "We are going to the race to have fun with it.  Once the race goes off we'll see how my body feels," says Montoya.  I feel very confident with my summer training and everything we have done until now.  My coach is great and is doing a great job coaching me.  He has been there the whole way.  He has gotten me this far and I trust him." 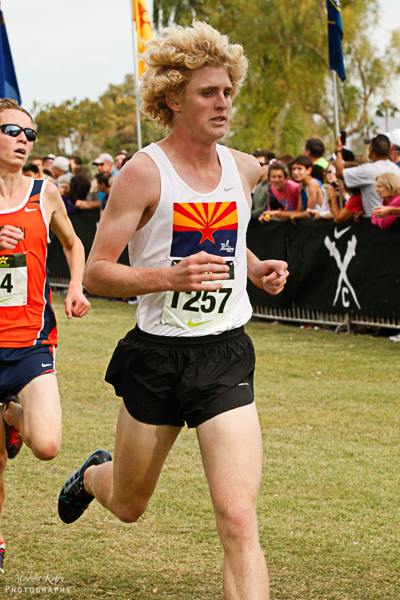 Montoya will have company at Nike Cross Nationals with fellow Arizona runner Andy Trouard (photo left).  "He is a great kid and is going to do well on that course.  It's his kind of course.  He has had a great season and I am going to enjoy hanging out with him."


Up until the 2012 track season Trouard was a competitive swimmer.  This is his first and only high school cross country season.


Montoya's final thought:  "Nothing more can be done at this point except for the fine tuning……….I am going to enjoy the moment."


The Nike Cross Nationals will be held on Saturday December 1st and will have a live broadcast starting at 9:30 AM Pacific Time.   We will post the link as soon as it is available.