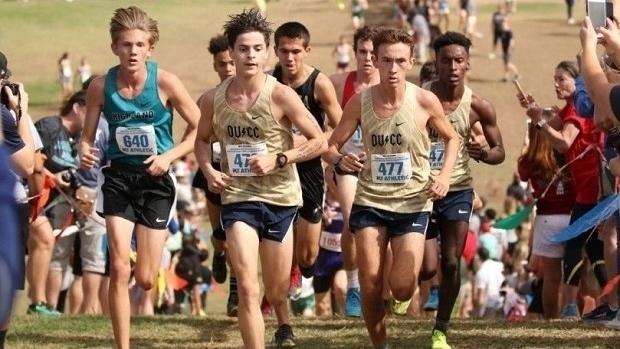 (Desert Vista obtained one of the lowest scores for large schools in Arizona history.-photo by John Hays)

Daschbach Pulls Off The Upset & Wolf Dominates-DI Wrap Up

The State Championships on Saturday, were everything we had hoped for and more! The Division 1 races continued the pattern of a female front-runner and a team of boys on a winning streak. While Desert Vista's boys squad had the target on their back, it was a very distant one with three of their boys ranked among the top-10 in the State. In the girls race for the Team Championship, Chandler and Xavier were set for an evenly matched slugfest.
Boys Results
Girls Results 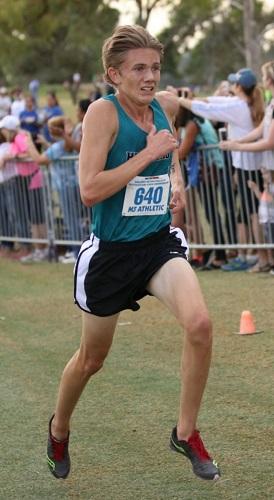 (Right: Leo Daschbach pulled off an upset over top returner Cheney.-photo by John Hays)
First came the boys race, loaded with 9 of the top-10 boys in the State as well as 7 of the top-10 teams including Desert Vista ranked 3rd in the Southwest. The pack whittled down throughout the race and at the top of the final hill overlooking the finish, Habs Cheney (Desert Vista, Sr.) seemed to have the title in the bag until Highland's Leo Daschbach (So.) unleashed his kick down the home stretch to overtake Cheney by three seconds and clock in a 15:52.8 victory. Caden Hercules (Desert Mountain, Sr.) finished 3rd in 15:59.8, and David Nelsen (Hamilton, Sr.) took 4th in 16:02.3. Desert Vista's Reece Donihi (Sr.), Sammy Van Alstine (Fr.), and Bryce Schmisseur (Sr.) followed Cheney with top-ten finishes, and soon after Nick Thatcher (Sr.) closed the book on one of the fastest performances seen by a team at the State Meet, collecting 34 points over a 26 second spread. Brophy took the runner-up title with 130 points, just ahead of Highland with 141.
The girls race was next for Division I, Desert Vista's top female returner Haley Wolf (Sr.), broke away early, from her competition eager to secure the second individual title of her career. Chandler's Mihajla Milovanovic (Jr.), Becca Taylor (Jr.) and Kerri Welch (Sr.) held nothing back in their pursuit for a team title. Wolf crossed the finish 1st in 18:38.3 for a cross-country State Title. Caroline McLeskey (Highland, So.) fought her way to runner-up in 18:56. Milavanovic had stepped up for the Chandler Wolves leading with a 3rd place finish in 19:16.9. Following Mihajla, Grace Driskill (Rincon University, So.) edged out Kylie Welch (Sr.) by 4 tenths of a second.
(Below: The Chandler Lady Wolves edged out Xavier for the win in D1 Girls race.-photo John Hays) 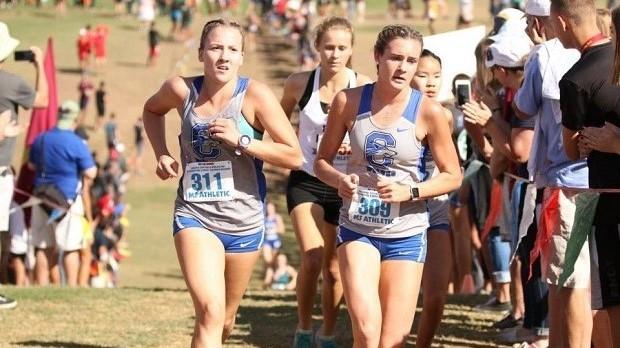 Despite Chandler missing their no. 1, no. 6, and no. 7 runners, and Xavier's efforts with their top-five finishing between 11th and 20th, the Wolves achieved their season goal of winning the D1 Girls State Title, with 55 points. Xavier took home the runner-up trophy with 77 points and Desert Vista placed 3rd with 124.
Tweets by MileSplitAZ