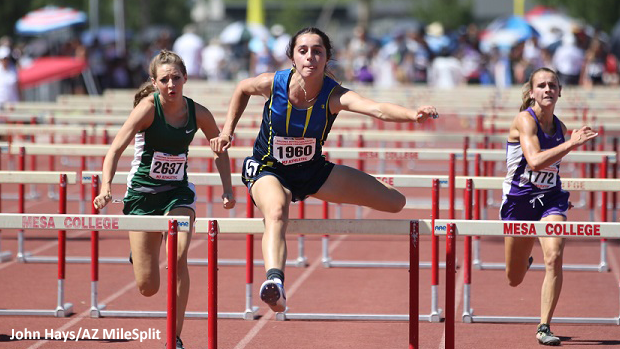 This spring, Jess Sherwood capped off her career for the Roughriders during which she garnered a total of seven track and field State Titles. She also played Basketball and Volleyball, which she has committed to play at Eastern Arizona College. In May, she secured three individual State Titles in the 100m, 200m, and the 100m Hurdles and anchored the Pima Ladies to victory in the Division IV Girls' 4x100m Relay.
Where are you from and when did you begin running?
I'm from Pima, AZ. I've always liked to run but I didn't join track until 7th grade.
What was your most memorable race?
My most memorable race was when I won State for the first time in the 100m hurdles my sophomore year.
Did you listen to music before competing? If so what's on your playlist?
I did not listen to music because I wanted to really focus on my races and how to run them my best.
Who would you consider your biggest competitor over your four years?
My biggest competitor was probably Kacey Haynes from Pusch Ridge Christian Academy.
Below: Sherwood held off Haynes of returning champions Pusch Ridge Christian Lions for the victory in the 400m Relay.-photo by John Hays 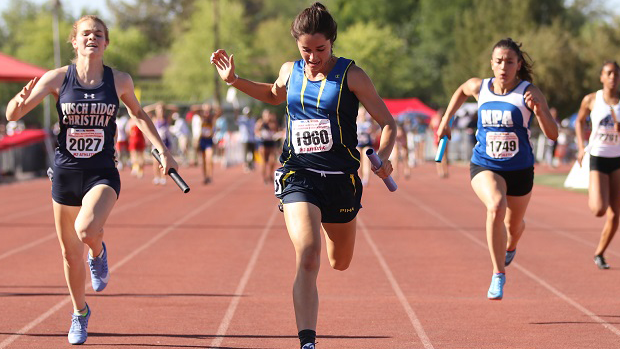 What was your greatest accomplishment?
My biggest accomplishment was being a 7-time State Champion in track.
If you could do it all over again what would you change about your athletic career in high school?
I would definitely try more events that I was interested in like pole vault.
You played volleyball for Pima and you've committed to play volleyball at Eastern Arizona College.
How did you like being a dual sport athlete and what effect do you think it had on your career in track?
I played basketball as well and I think doing those three sports helped with the other ones so far as conditioning goes. I was always a little cautious that I would get hurt but that was a risk I was willing to take because I loved all the sports I did.
What were the most difficult obstacles you had to overcome?
The most difficult obstacle was probably breaking my wrist my junior year trying to get through school and sports with my broken right hand.
What will you miss the most about competing for your team?
I'll miss the support from everyone in my school and town.
What advice would you give to younger athletes?
Try everything you want to and don't give up just because it's hard.
What influence has your coach had with respect to your performance and overall life goals?
My coach was super supportive in whatever we wanted to do so that was nice.
What are your college plans? Have you decided on a major?
I am playing volleyball on a scholarship at Eastern Arizona College. I am going to major in business management.
How did you decide that EAC was the right choice for you?
I didn't want to go far from home and my family. I'm kinda a baby. and I've always wanted to play their since I was little. It was a kinda like a life-long dream I've had haha.
Who would you like to thank for your success in high school?
I would like to thank my parents for my success.

Where is your favorite vacation spot?
Hawaii
What's the hardest event in track and field?
400m dash
What's the last movie you watched?
Indiana Jones Raiders of the Lost Ark
What was your favorite subject in school?
Seminary
Would you rather have the ability to play any instrument or communicate in any language?
Communicate in any language
Jess Sherwood-1st in Girls 100m & 100mH AIA Division 4 State Championships May 7, 2018
Jessica Sherwood-1st in D4 100H AIA Division 4 State Championships May 7, 2017
Tweets by MileSplitAZ