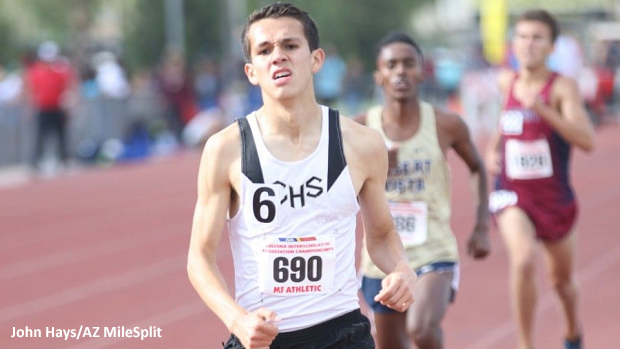 1600m -- 4:13.88 @ AIA Division 1 State Championships
3200m -- 9:06.26 @ Brooks Mt. SAC Relays
5K -- 15:07.40 @ Desert Twilight XC Festival
Thomas Cain capped off his career for the Cibola Raiders as one of the top runners in the State. During the cross-country season, Cain ran 15:07 at the Desert Twilight Festival and moved on to place 8th at the AIA Cross-Country State Championships. This spring ran a PR of 9:06 for 3200m at the Mt. SAC Relays. At State, he placed third in one of the fastest 1600m races in AIA history, running a lifetime best of 4:13. That weekend, he also claimed his second consecutive State Title in the D1 Boys 3200m.
Where are you from and when did you begin running?
I am from Yuma, in the southwest corner of Arizona on the border of California and Mexico. I began running about 3 years ago exactly on February 3rd 2015, my first track practice my freshman year. I didn't run cross-country freshman year but rather played football.
What was your most memorable race?
My most memorable race is my sophomore year two mile at state where Tyler Beauchamp and I raced down the last 70 meters neck and neck. I can still here Ron Smith's "Tyler, Michael, Thomas" as we came around the curve. I've written several essays about this moment and still have bad dreams about it. It's a race that I can always look to for motivation and had the biggest emotional toll on me.
What was the hardest workout you ever did in your career for Cibola?
That's a tough question. I can think back to so many workouts and how grueling 24x400s were or even the countless mile repeats during my sophomore cross-country season, but the hardest workout I can think back to is actually our shortest where did 4x300s all out. I think I went 38,39,42,40.
Who would you consider your biggest competition over your four years?
All of Gila Ridge High School. Definitely a team rivalry that went back and forth through the years while also being a fight individually in the city between Danny, Luis, and Aldo Marquez, along with Cody Hartman and Christian Deboard.
What were the most difficult obstacles you had to overcome? 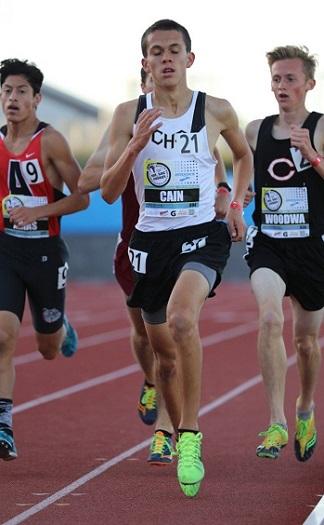 (Right: Thomas ran a huge breakthrough performance in the 3200m at Mt. SAC Relays last year.-photo by Ben Crawford)
Coming back after my sophomore year two-mile after losing by 4/100ths of a second was a huge obstacle. I felt defeated and went into a dark place it's a race I look back and reflect on always how pain and failure can propel you to great things. Coming back the next year and winning by an even smaller margin (1/100th) just meant so much more to me.
If you could do it all over again what would you change about your running career in high school?
I wouldn't want to anything different. Every failure happened for a reason. In simple terms: "Gods Plan" -Drake.
What will you miss the most about competing for your team?
The Cibola program is a once in a lifetime experience being under a staff of coaches who have so much passion for not only running but the general happiness of each and every individual on the team. They create such a different atmosphere where if you absorb the program you will succeed in all aspects of life from running to academics and socially.
What advice would you give to future Cibola Raiders running cross country?
Set goals and when you set those goals dream big. Some people laughed at me when I told them I wanted to be a State Champion my freshman year or even when I set my time goal in the 2-mile a minute faster than I had ran the year before. After that, trust in Norton and you can achieve anything.
What influence has your coach had with respect to your performance and overall life goals?
I truly believe Coach Norton is the best coach in Arizona. In addition to coaching runners to the top in the State (Bernie Montoya, Victor Mendoza, Jake Smith etc.), he's also coached athletes who don't have the most talent early in their career but end up being solid runners later on (i.e Nicholas Garren ran 28 mintues for 5k as a freshman and ran 16:59 as a Senior this year and placed 4th at the Sectional meet). His overall care for everyone individually is evident in Cibola's success. #AllHailNorton
What are your college plans? Have you decided on a major?
I have committed to the University of Central Arkansas and have decided to major In Business and Marketing.
(Below: Cain signs with Central Arkansas-photo provided by Thomas Cain) 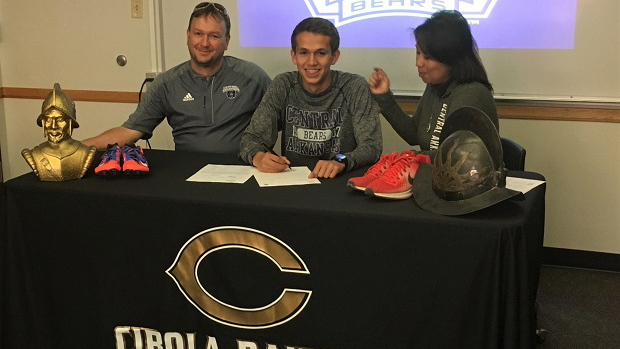 What made you decide to commit to University of Central Arkansas? Was there something that you liked about Coach Martin's coaching philosophy?
Well, I really wanted to go out-of-state plus none of the in-state schools sparked much interest. Coach Martin on the visit was really genuine and cared about the cross-country program. However, Coach Beau (Theriot) is the distance coach and the way his system is set up is like no other. In the end, the guys on the team swayed me a lot and the potential I saw in the other freshmen coming in made me dream big.
Who would you like to thank for your success in high school?
I can only thank the support system I have around me from the coaching staff (Norton, Mclean, Zarbock, Gomez, Mckenna) to my family (Nana Beba, Tata Fonso, Rob, Bea Cain, Karina and Drew Moore). Lastly but not least all my teammates past and previous who have become lifelong friends. There are countless people I owe so much to and can never repay.
Is there anything else you'd like to add?
Thanks so much for covering Arizona running the past few years. I can't wait to give back to this community that has shaped me into what I am today.