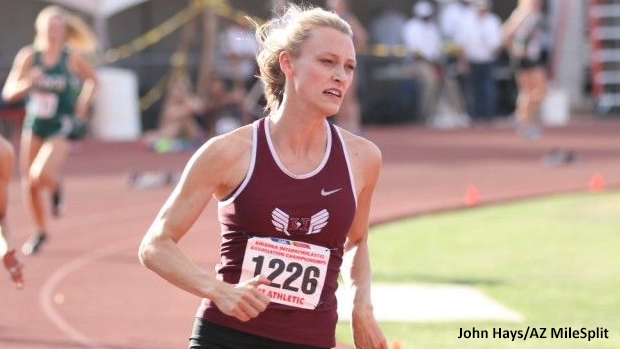 PRs
100m -- 12.24 @ Hohokam Invitational
200m -- 24.58 @ AIA Division 1 State Championship
400m -- 54.87 @ AIA Division 1 State Championship
800m -- 2:19.70 @ Hohokam Invitational
Morgan Parzych graduated from Hamilton High School with back-to-back D1 State Titles and four Hamilton school records to her name. At the Chandler Rotary Invitational, she ran her first sub-55 second performance for 400m where and placed 2nd in the Elite Section. Later that night, she anchored the Lady Huskies 4x400m Relay Team to a third-place finish and a new school record of 3:50.09. At the State Meer, she ran a 400m PR of 54.87 to secure her second consecutive D1 Girls 400m State Title in the event and placed runner-up in the D1 Girls 200-meter dash.
Where are you from and when did you begin running?
I grew up in Chandler and went to Hamilton High School, and I started running track my freshman year.
What was your most memorable race moment?
My most memorable race moment was my freshman year when our 4x400m relay team of Jasmine Malone, Carmen Bermudez, Brianna Loff, and I set a new school record at Red Mountain Rampage. I had been wanting to be on the 4x400m relay the entire season, and I just kept grinding and hoping I would get my shot. That night was the first night I was given the chance to run on the relay team, so breaking the record is something I will never forget. We knew it was the beginning of something special.
Do you listen to music before competing? If so, what's on your playlist?
I'll usually listen to music on the bus ride to the meet, but once I get there I prefer to watch all the races. I'd rather be in the stands watching the meet than hanging out under the tent because I tend to get bored, and I like to be by myself so I can get focused on my own races. When I do listen to music I mostly listen to hard rock and groups like Imagine Dragons.
Who would you consider your biggest competitor over your four years?
My biggest competitor was also my best friend, Melanie Loff. We trained together every day at practice, and what was nice was that we competed head to head in the 400m but then she ran the 800m and I ran the 200m so we each had our own thing, too. We definitely pushed each other day in and day out and I'm thankful for the competition.

Congratulations to our girls 4x400m relay team! On Saturday night, they broke their own school record with a time of 3:50.09, ranking them #21 in the nation and #4 all-time in the state of Arizona! Congrats!

What was your greatest accomplishment?
My greatest accomplishment was being able to win the 400m at State for the second year in a row. I think when I won the first year, my junior year, it surprised a lot of people, and I think many thought it was maybe a fluke or only because of the crazy, windy conditions. That first win gave me a lot of confidence and made me work that much harder when I was heading into my senior year. When I won my senior year, it showed that I truly did belong on the top of the State podium. I felt a lot of pressure and a target on my back all year long, so it felt really good to win back-to-back.
If you could do it all over again, what would you change about your running career in high school?
Looking back, I have very few regrets. The only thing I might change is that I would not have run cross country my sophomore year. It was early on in my track career and I felt like the 800m was going to be one of my strongest events, so I ran cross country thinking it would really help my 800m time. I know now that I should have just stuck to the short sprints, but I did learn to really admire and appreciate cross-country runners. I also learned cross-country is definitely not for me!
Since you didn't run long-distance, how did you develop your aerobic strength for the 400-meter dash?
We did a lot of heavy volume workouts, starting right away in preseason. I really focused on 300 repeats leading up to the first meet.
What were the most difficult obstacles you had to overcome?
One of my biggest obstacles was my sophomore year, and it was myself! I was starting to work on and drop my 400m time, and I ended up in a really fast heat at Chandler Rotary. I ran a 58.79 and took dead last. My confidence took a big hit, and, honestly, I never really bounced back that year. Admittedly, I was a bit of a headcase. I also had to overcome a concussion my junior year. I missed all of preseason and was pretty nervous about that, so I worked extra hard with my team and with a personal trainer once regular season started to make sure I would be where I needed to be.
What will you miss the most about competing for your team?
I will miss my teammates and my coaches. When you spend so much time together you form pretty strong bonds with everyone. I will also miss the long days at the track and the fun atmosphere that comes with high school track. Last, one of my brothers, Gavin, was on the track team with me this year as a freshman, and I'll miss getting to see him compete on a regular basis.
What advice would you give to younger athletes?
I would say to take practice seriously, trust the process, never give up, and don't worry about what other people think of you. With success comes a certain amount of resentment, so you just need to learn to deal with it! Hold your head high and let success be your noise.
What are your college plans and have you decided on a major?
I will be attending the University of Wisconsin - Madison to run Track & Field, and I will be pursuing a Biology major so I can continue on to med school after I graduate. 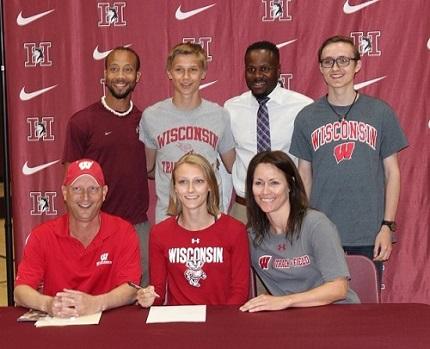 (photo provided by Morgan Parzych)
What convinced you that UW - Madison was the right program for you? Was there something you liked about Kareem Jackson's coaching philosophy?
I have always wanted to be a Badger, and once I met Coach Jackson I was even more sure that was true. Coach Jackson is a lot like my high school coach. I can tell he really cares about his runners as people, and I think he brings out the best in his athletes. UW-Madison is an amazing school, and I'm excited to be part of a growing sprint program there.
Who would you like to thank for your success in high school?
Most of all, I would like to thank Coach Vaughn Powers. I never ran track until my freshman year in high school, so Coach Vaughn is the only coach I have ever had. He saw something in me my freshman year and really took me under his wing. He believed in me through my sophomore year, even when I didn't really believe in myself. And when I started to drop decent times my junior year, he really jumped in and started to push me to my limits. Before the State Championships my junior year, Coach Vaughn told me that he truly believed I could take the 400m title if I wanted it badly enough. Basically, he convinced me that I could do anything I wanted to through hard work and perseverance.