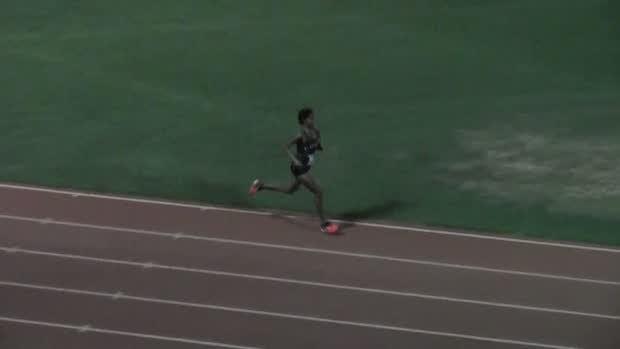 Flagstaff junior Mia Hall in the 3200m at The 2022 AIA State Track & Field Championships in Mesa.

MESA, AZ. -- Flagstaff junior Mia Hall's race plan was quickly interrupted in the Division II Girls 3,200m on Saturday when she found herself on the ground with a lacerated knee within the first 20 meters of the gun going off.

Hall was tripped up by a fellow competitor in the opening stages of the race, which caused Hall to fall down before quickly getting up. Because the fall happened within the first turn of the race, officials blew the gun for a second time to call for a re-start. These types of restarts are typically uncommon in distance-type races since falls are rare in such a long race as the 3,200m.

The junior appeared to be injured at first as she examined her knee on the starting line before the restart. Hall then gestured to the officials she was good to go.

Despite being bothered her knee, Hall showed no signs of the fall as soon as the race restarted. Hall swiftly inserted herself at the lead of the pack and never looked back en route to winning the AIA Division II state title in a time of 10:39.52.

Hall already owned the fastest time in the state for the event with her 10:28.59 from the Desert Vista Last Chance Meet on April 30. But Hall's winning time of 10:39.52 also ranks as the second-fastest in the state this season -- with a bruised and cut knee.

You can watch full video of Hall's race right here: