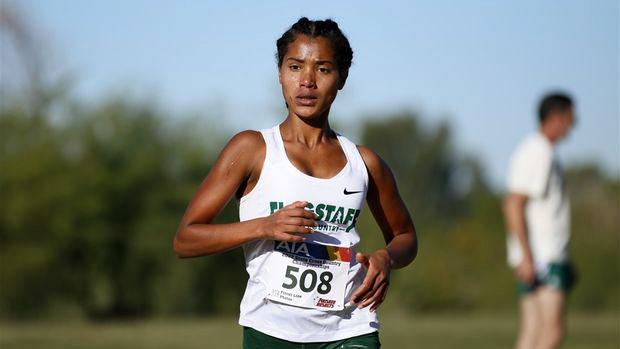 Flagstaff senior Mia Hall in the Division II race at The AIA State Cross Country Championships at Cave Creek Golf Course in Phoenix. Hall won the state title in a time of 18:50.7.

The senior etches her name into the history books with the three-peat, spearheads Eagles' team title

PHOENIX, AZ -- Heading into The 2022 AIA State Cross Country Championships at Cave Creek Golf Course, Flagstaff senior Mia Hall was just happy to had made it to the meet.

After dealing with an injury the previous three weeks and missing the Sectional meet last week, Hall was unsure if she would be able to run. With the guidance of coach Trina Painter, Hall was able to get in racing shape and on the line ready to defend her state title for a third time.

Right away, it seemed like Hall's missed time from running was impacting her performance as she came through the first mile in ninth place at 6:14.6, seven seconds off first place. But, that was by design as the senior was getting a feeling out for herself and the race.

"She wanted to go out a little bit cautious just to make sure she would be okay throughout," Painter said. "And then if she felt good, she would go and pick it up at some point in the race."

Hall was feeling good by the second mile as she had already worked her way up until to the lead runners, coming in at 12:14.9 to Millennium junior Landen LeBlond's 12:14.3. From there on out, Hall displayed her signature endurance as she extended a gap of 34 seconds in the last mile.

She won the race in a time of 18:50.7, winning her third consecutive state title in cross country.

Painter was just hoping for a finish from Hall. With the injury and missed time, expectations were lowered a bit.

Instead, another championship from Hall.

"Three titles, essentially, is impossible," Painter said. "But that's who Mia is. She takes on whatever and everything. For her to win three titles, dealing with a small injury on top of it, that was just incredible and impressive.

LeBlond, who was in the front pack for the first two miles, did not finish the race. Campo Verde junior Clara Jones ran one of her best races of the whole season, coming in second place at 19:24.2.

The rest of the all-state team:

With a nod to the future, freshman Taylor Biggambler turned in a huge performance to help lead the Eagles to a team title. Biggambler ran 19:29.3 to come in third place. Biggambler and Hall's low sticks were vital parts of Flagstaff's win, which scored 48 points to comfortably come ahead of second place Desert Mountain at 144 points.

In total, five of the seven runners for Flagstaff at the state meet were sophomores or younger.

Cienega was third with 172 points.