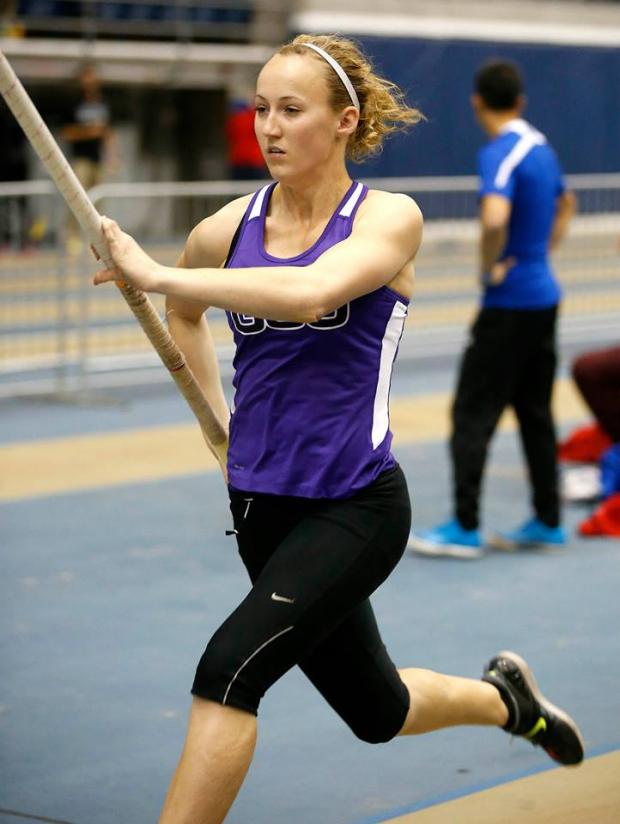 Lauren Graham graciously took time out of her busy life to write this article about the pole. Having earned multiple All-American certificates at Colorado and Grand Canyon, Lauren is certainly an expert when it comes to the pole vault. Currently she is serving her country as a nurse in the U.S. Army, though her college coaches will long remember her positive team first attitude. Photos Contributed by Darryl Webb/GCU Athletics

Common responses from telling people that you are a pole vaulter typically include some amazement with a lot of confusion. So, for those who have ever seen a pole vault competition and wondered “why" or “how" we do what we do, this article is for you.

To clear the air on some common misconceptions about pole vaulting, I will start by saying there are many different pole lengths and weights (to correlate with the athlete's size, ability level, goal for that day's training/competition, weather, etc.), so a 9th grade girl and collegiate male are not using the same size poles. No, these poles are not intended to fold in half when you travel, and yes, the exact spot of our “take off" step can make a big difference in the jump- this is why you will typically see someone “catch steps" in a practice or meet.

The pole vault can easily be broken down into three phases: the run, the take off and the vault itself- think of it like one big physics equation. During the run, the vaulter wants to build up as much controlled power and speed as possible, all while steadily lowering the tip of the pole. The goal is to have the most speed/power at the end of the run in order to convert tat energy into an explosive vertical take off (or jump). At this point, the athlete's arms should be extended high above his/her head holding one end of the pole, with the tip of the pole in the box (the wedge cutout where the pole is planted, or placed, for take off). Generally, the athlete's foot, hips, shoulders and top hand will all form a straight line that is perpendicular to the runway.

Now for the fun part, the vault! The higher a vaulter's hands are reaching at take off, combined with a high grip on a pole, a fast run and a big jump at the take off, the better. They then swing their trail leg, the one they didn't jump off of, keeping it long and extended like a pendulum, to their hands. Ideally, their body is now in somewhat of a “V" position. In order to achieve the invert, they will then drop their shoulders and bring their hips as close to the pole as possible. This is where the vaulter will then turn 180 degrees, clear the bar, and land on the mat.

In a competition, there is an opening height and a set measurement to determine how the bar will be raised (in high school this is typically 6 inches). Prior to the start of the competition, the vaulters must decide their “opening height." Once the bar goes up, it is not to go down to a lower height again. It will not be raised until all athletes who wish to jump at the set height have either cleared the bar, or failed to clear it after three attempts. Should a vaulter decided to skip a height once they have one or two failed attempt(s) at a height, they are not granted any additional attempts. However, once a bar has been cleared, the number of attempts for the next height resets to three. The bar continues to be raised throughout the competition until there is one athlete remaining. That winner can chose to end the competition then, or to continue jumping until they are unable to clear a height in three attempts. The rules for ties differ in high school and in college, but ties do happen and it frequently comes down to who had more misses- so every jump counts!