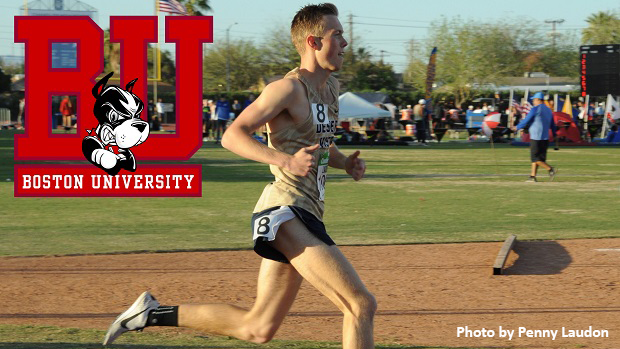 Today, we salute Aksel Laudon of Desert Vista High School in Ahwatukee, Arizona. During the fall Aksel, played a crucial role as part of the Thunder's campaign to reach NXN, where they placed 8th in the Nation. This spring, he was the first to break Desert Vista's 1 Mile and 3200m school records with his back-to-back 4:17.63/9:12.09 at the Arcadia Invitational. He capped off his final regular season at the State Championships where he aided the Desert Vista Boys in securing the Division I State Title, with a 3rd place in the D1 Boys 800m, 4th in the 3200m, and anchored the Boys 4x800 to 2nd place.

Where are you from and when did you begin running?
I am from Phoenix, AZ, born and raised. I started running in 6th grade, but I didn't focus on running over soccer until sophomore year.
What was your most memorable race?
I have countless unforgettable memories, but probably my most memorable moment was running two school records on back to back days at the Arcadia Invitational. Specifically, I remember the finish of the 3200m, closing in a 61 second final lap under the lights. With this breakthrough performance, I finally felt like my running career was coming to fruition, and I was overwhelmed with emotion at the finish.

Did you listen to music before competing? If so what's on your playlist?
Only sometimes, but when I do I get pumped up with rap. The top three artists on my "hype" playlist are probably Childish Gambino, Kanye, and Big Sean.
Who would you consider your biggest competition over your four years?
For sure my biggest competition has been my teammates. We are best friends but are also super competitive people. Whether fighting for a spot on the team or just for bragging rights, we motivate one another during practice and races. No one wants to get beat by their training partner.
What was your greatest accomplishment? 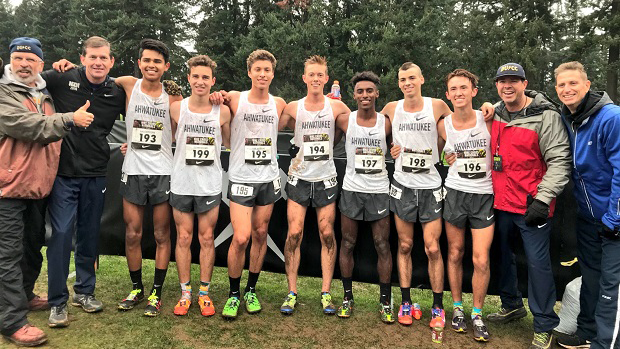 (Right: Desert Vista placed 8th at Nike Cross Nationals last fall.)
My greatest accomplishment was also my team's greatest accomplishment. That was finishing 8th at Nike Cross Nationals and proving that we belonged in the national discussion.
If you could do it all over again what would you change about your running career in high school?
I would tell myself to have faith in the process and my talent. In my earlier years of running, I would take every training session as hard as possible and always try do more than anyone else. I would also get discouraged by bad races. Now I know better that improvements will come in time with consistency and recovery.
What advice would you give to younger athletes?
Work harder and smarter and never give up on yourself.
What are your college plans? Have you decided on a major?
I will be majoring in biomedical engineering at Boston University, where I will be competing in cross country and track and field.
What attracted you most about attending Boston University?
I had actually never considered Boston University or even really heard of it before Coach Spangler contacted me, but the more I found out the more I liked it. Academics come first for me, and BU has a very highly ranked Biomedical Engineering program. The Boston area is an ideal place to be a biomedical engineer and an aspiring physician. However, in order for me to choose BU over MIT and Cornell, there had to be another factor besides academics, and that was the team.
Your future Coach Paul Spangler had a lot of success at the University of Florida prior to joining the Terrier staff last year. What do you like about his coaching style?
His national-level success at a Power 5 school certainly demonstrates his coaching knowledge and ability. However, I think his best characteristic is his ability to relate to his athletes. He was a tenacious competitor and runner in his own right at the University of Alabama and is still training today. He not only understands what his student-athletes are dealing with, but he takes time to build relationships with them and stay closely involved in their training and well-being.
What are you most looking forward about being Terrier distance runner?
I look forward to being part of the team most. When I visited, I really liked the team and the culture they had created. I enjoyed its cosmopolitan feel, with athletes from Australia, a fellow incoming freshman from Canada, and others from across the US. Every teammate is invested in success, and they are a program on the up, hopefully starting with a berth at the NCAA cross country meet next year. I know that at BU, I will have great teammates and a great cause to push me to reach my potential.
Who would you like to thank for your success in high school?
First and foremost, I owe every success, on and off the track, to my family's constant support and sacrifice. However, I also could not be more thankful for my selfless coaches and teammates, past and present, who have helped nurture my love for the sport of running and make me look forward to going to practice, even at 5 a.m.
Fun Stuff!
What's your favorite thing to eat after a race?
Lots of In-N-Out
If you could have dinner with any three people, who would you invite?
Steve Prefontaine, Barack Obama, Xi Jinping
Best literary work you read in high school?
Ishmael by Daniel Quinn
What's your favorite sports team?
Arizona Cardinals (or Team USA if it counts?)
What are you most interested in doing when you get to Boston?
Meeting cool people and exploring new places to run!
Aksel Laudon-2nd in Boys 1600m Aztec Invitational Mar 5, 2018
Boys 1600 Finals Section 3 Aztec Invitational Mar 4, 2018
Boys 3200 Section 2 Richard Thompson South Mountain Classic Feb 26, 2018
Aksel, Habs, Reece Sweep Boys 3200m Richard Thompson South Mountain Classic Feb 25, 2018
Boys 1 Mile Finals Section 1 UW High School Invitational Feb 9, 2018
Boys 3K Finals Section 1 UW High School Invitational Feb 7, 2018
Tweets by MileSplitAZ