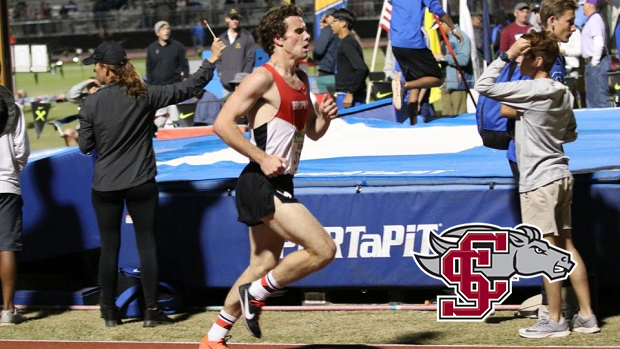 PRs
2:01.82 -- 800m
4:23.58 -- 1600m
9:11.97 -- 3200m
15:16.00 - 5 km
Drew Burns capped of his Senior year at Brophy College Prep, during which he stepped up to lead the Broncos. This spring, he took 3rd place in the Elite Boys 3200m at Chandler Rotary, with a lifetime-best by seven seconds. He lowered it even further at Arcadia, where he won the Rated Boys. At State, he finished 6th in the D1 Boys 3200-meter run on Saturday. We wish him the best as he moves on to Santa Clara University in California's Bay Area.
Where are you from and when did you begin running?
I'm from Scottsdale, Arizona and I began running (competitively) after the CYAA cross country race that I won as a 7th grader when Coach Dave Van Sickle of Xavier Prep asked if I wanted to join his club running team, Go The Distance. I was a soccer player at the time and didn't start running seriously until my freshman year.
What was your most memorable race?
Arcadia 2018 was definitely up there. Despite my contacts falling out 5 minutes before the race in addition to my spikes getting untied on lap 5, I ended up winning the same race that I finished second to last in the previous year. A year ago, I was in tears of heartbreak and frustrated with myself and this past year I was in tears of joy. I PR'd by 7 seconds and celebrated with my dad, my teammates and coaches after. It's a moment I'll never forget.

But we're all currently dead last in line at the BJ's in Arcadia, CA... :stuck_out_tongue: pic.twitter.com/Gx9Mrrz3ju

Did you listen to music before competing? If so what's on your playlist?
I create a new playlist for every season specifically, but this track season, Anekin Hetman and I listened mainly listened to Logic, Kendrick and Kanye before, but we always made sure to listen to God's Plan by Drake to get the hype going.
Who would you consider your biggest competition over your four years?
Luke Mason (Brophy '17.) Ever since my freshman year Luke and I have had a somewhat friendly rivalry and this was beneficial for both of us as we trained together every day. I always wanted to beat him and he would never show mercy. What started as an intense rivalry has transformed into a great friendship and I am extremely grateful for that. Either him or Thomas Cain.
What was your greatest accomplishment?
Being selected by my school as the recipient of the 'Fr. Harry 'Dutch' Olivier Man for Others' senior award. I try to not only be the best runner I can be, but the best person I can be.
What were the most difficult obstacles you had to overcome?
The track season of my junior year was a mess. I had tendonitis in two spots in my right ankle, I was 10 pounds heavier than I was in cross country season, and I was exhausted from staying up late and having a bad diet. Coach Borboa did not let me go into this dark place where I thought my running career was over. Instead, he made it clear to me that if I really wanted to, I could overcome these struggles. He encouraged me to work on my diet, go to PT, and that following summer, he gave me all the tools I needed to be able to have a successful cross-country season.
What will you miss the most about competing for your team?
Running every day with the Brophy Broncos! I'll miss the bond that we have developed and I'll miss not seeing the guys around on a daily basis. I am excited to see what everyone goes on to do in their lives!
Below: The Brophy Broncos placed 2nd at the cross-country State Meet. 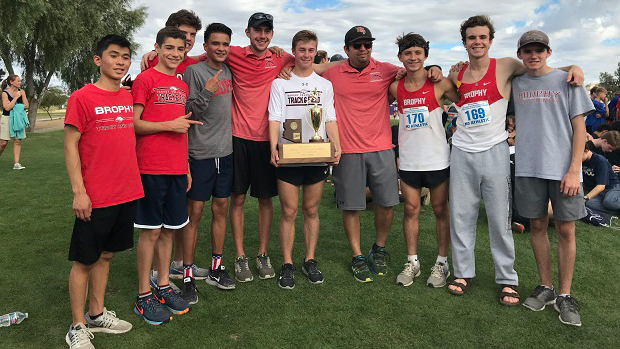 What advice would you give to younger athletes?
Have fun! High school cross country and track is extremely exciting so have fun. Whether you use it as a way to stay fit and hang out with friends, as a stress reliever, or if you race for the competitiveness of the sport, do what you can to get better every day and you'll be alright.
What influence has your coach had with respect to your performance and overall life goals?
Coach Borboa, Coach Powers and Coach Keahon have each been incredible mentors to me through my high school running career. Coach Keahon's passion and devotion to the sport has shown me what true commitment is like. Coach Borboa's enthusiasm and compassion has helped me find 'cura personalis' in my life along with the lives of others which has made me the leader I am today, and Coach Powers' knowledge and faith has helped me seek for 'magis,' or the more in life which has helped me grow intellectually over the last year. 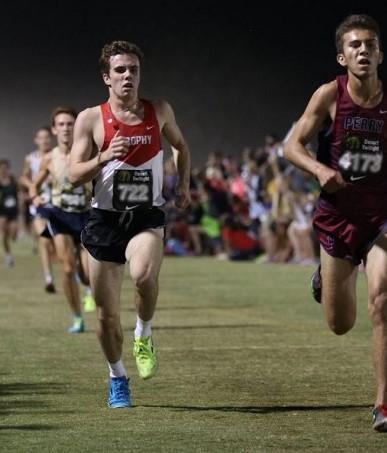 Right: Drew ran a lifetime best at Desert Twilight last fall, and placed 11th in the Sweepstakes race.-photo by John Hays
What are your college plans? Have you decided on a major?
I am studying and competing at Santa Clara University in the fall and I am in the Leavy School of Business. I am also hoping to minor in Spanish. I'm also like to join advocacy groups on campus and be a big Santa Clara sports enthusiast.
What attracted you to attend Santa Clara University?
Like Brophy, Santa Clara is a Jesuit school and I have seen a lot of my classmates go there over the years. It's academic competitiveness and Jesuit values were crucial to me, but the influence that the running team had helped me make my decision a lot easier. It is a young program on the rise in the most competitive distance conference in the country and everyone is improving at SCU year after year.
Who would you like to thank for your success in high school?
Too many people! I'm extremely grateful for my parents and siblings and the efforts they have made for me to be the best runner I can, I am grateful for my coaches, Coach Borboa, Coach Powers, Coach Keahon and the rest of the Brophy cross country and track staff for their undying support and positive encouragement, and all of my teammates who are always there to mess around with on our runs down Central Ave. Me Hoy Minoy.
Is there anything else you'd like to add?
AMDG, Drew

If I had a super power it would be flight for sure. Super basic, but who else do you know that can fly?

My favorite vacation spot was my grandparents' old lake house in Northern Ontario. I would wakeboard, go fishing, and run on hilly dirt roads almost every day. I also love visiting my other grandparents in Toronto and going to Blue Jays games with them.

What's the best literary work you read in high school?

The best thing I've read in high school was actually not for Brophy, but for a leadership scholarship. Matthew Desmond's Evicted is about the lives of people in Milwaukee who live in poverty and talks in depth about their struggles and current stage in life. The book was super heartbreaking for me and reminded me of the lives of the El Salvadorans I met the summer prior in a service trip.

If you could have dinner with any three people who would you invite?

If I could have enchilada night at the Hociel Landa's house with any three people, they would be Bill Bowerman, President Obama's and AZ's very own Ron Smith, who would announce everything that is going on at the table.

What are you most excited to do when you get to Santa Clara?

When I get to SCU I'm super excited to try a lot of new things and I will be getting involved around campus, but I'm super excited to visit San Francisco for the Bay to Breakers race. A lot of Santa Clara students take the train there really early in the morning, dress up in costumes and the atmosphere looks like tons of fun.