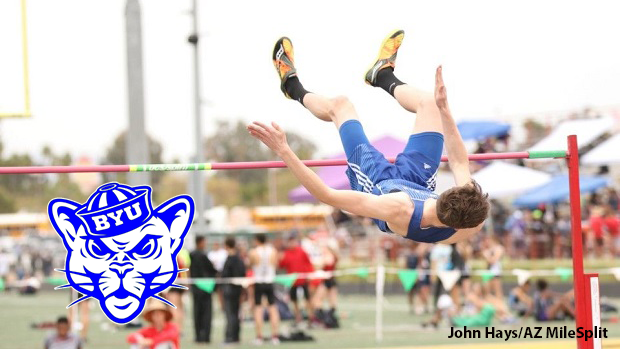 Dylan Kay returned as the top high jumper in the State and went undefeated during the 2018 season. Dylan reached his highest mark at the Blue Ridge Invitational where he cleared 6-11.25. He ended his career as a D3 State Champion at Riggs Stadium where he, his younger brother Nathan, and teammate Jake Hall swept the top three spots in the Division III Boys High Jump competition for the Snowflake Lobos. This weekend, Dylan will attend the Great Southwest Classic in Albuquerque, NM and take another shot at clearing 7 feet.
Where are you from and when did you begin jumping?
I was born in Sacramento but we only stayed there for a year before moving to Snowflake, AZ. I started jumping in 5th grade.
Did you play any other sports growing up?
Growing up I tried basically everything. I played soccer during most of my childhood. I played baseball, I did wrestling for a little bit, I played football for a year, and I played basketball. But track and basketball were the main ones I did in high school.
Did you have a pre-performance ritual?
Every time before I would jump, I would always close my eyes and envision what I wanted to happen, and the things I worked on in practice. 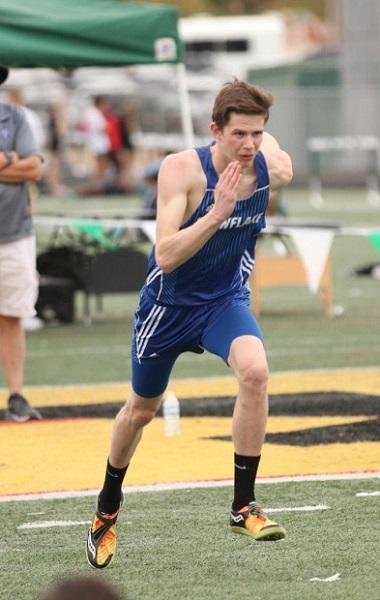 (photo by John Hays)
Who would you consider your toughest competitor?
Definitely Jake Hall. He's been with me all the way up from 5th grade. We've jumped against each other every meet.
What's your favorite thing to eat after competing?
We don't have anything like an Olive Garden in Snowflake. That's one of my favorite things is to go there after meets and eat their pasta.
What's your favorite thing about the High Jump?
I think it's the determination you have to have and the strength of mind to look at something almost a foot over your head and say to yourself that you can do it.
What was your most memorable moment over your Snowflake career?
Having my coaches when I first came in my freshman year. I was determined to do High Jump my own way, like how I had been the last four years. My coach sat me down and taught me exactly what I needed to do. He promised that if I followed his instructions I would succeed. I wasn't willing to at first but he definitely helped.
What is the most valuable thing you've learned from Coach Hipps?
One of the main things he always taught me was to believe in myself. As a freshman, I didn't even want to do track because I had broken my ankle the year before and I didn't think I'd be good enough to compete, but my mom made me do it. I went to track and Coach Hipps was nice and focused on me. I think I jumped 6-2 at my first meet.
What convinced you to sign with BYU?
I went there for track camp and talked to the coach. He had so much knowledge, that I felt like I could learn a lot from him. Plus their schooling is pretty good too. 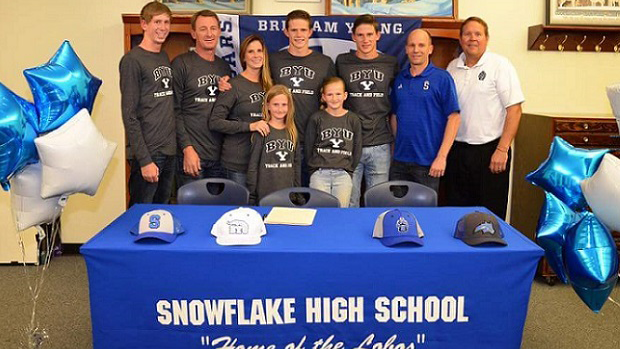 (Dylan signed with the BYU Cougars-photo provided by Dylan Kay)
Have you decided on a major?
Probably Business Management.
Who do you have to thank for your success in high school?
There's a few people. My parents, especially my mom for convincing do it in the first place. Coach Hipps of course, 'cause he's coached me through all of this and put in the extra time to make sure I succeeded. Same goes for Coach Johnson has woken up with me every morning and trained me. He's been very helpful on the mental side of it too.
Fun Stuff!
If you could have any superpower what would it be?
Probably to fly. I don't know why. I just think it'd be sweet.
Who is your favorite professional athlete?
The two I always watch are Mutaz Essa Barshim, (Rio OG silver medalist and current world leader), and Bohdan Bondarenko (Rio OG bronze medalist).
What was the last movie you watched?
I think it was Jumanji (Welcome To The Jungle-2017).
Would you rather be able to play any instrument or speak any language?
Definitely to learn any language. I love to travel and meet new people so to communicate to people from different cultures would be amazing!
Where's the best hang out place in Snowflake?
Whoever has an X-Box. Usually me and my friends go to my house or someone else's.
Snowflake Lobos Go 1-2-3 In Boys HJ AIA Division 3 State Championships May 5, 2018
Dylan Kay-1st in Boys High Jump Chandler Rotary Invitational Mar 25, 2018
Snowflake Boys Sweep the High Jump Medals Husky Invite Mar 12, 2018
Dylan Kay, Nathan Kay, & Jake Hall-1st, 2nd, 4th in Boys HJ Saunders Montague Desert Classic Mar 3, 2018
Tweets by MileSplitAZ