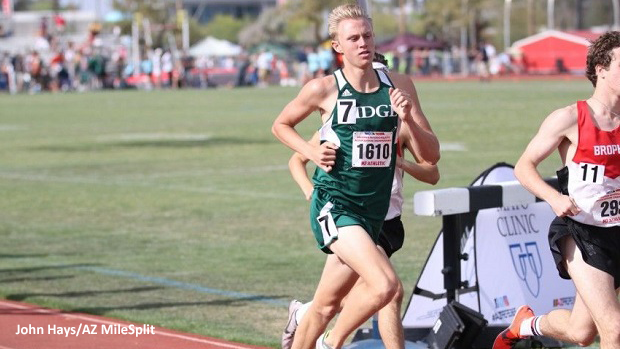 PRs
800m -- 1:57.83
1600m -- 4:22.38
3 Mile -- 15:21.10
5K -- 15:50.00
Reier Gilbertson is predominantly a middle-distance runner but can also hold his own on a cross-country course, running sub-16 minutes for 5K at Desert Twilight. This spring his first breakout race was at the Brophy AMDG Invitational where he ran 4:23.21 in the 1600m. The following month, he placed 3rd in a deep 1600m field at the Deer Valley District Championships. The following week, he ran 1:57.83 in the 800m at the North East Valley Championships. At the State Championships, he placed 11th in the D1 Boys' 800m and 12th in the D1 Boys' 1600m.
Where are you from and when did you begin running?
I was born and raised in Phoenix, Arizona and I started my cross country and track career in 7th grade where I ran middle school cross country at Northwest Christian and participated in open track meets in the long jump.
What was your most memorable race?
My most memorable race wouldn't be an individual event but the 4x8 at districts where Gavin Allen, Austin Clayton, Hunter Krasa and I put up the number one time in AZ and won the event that day.
Did you listen to music before competing? If so what's on your playlist?
I rarely listen to music before races. If I do it has to be old time rock and roll such as The Rolling Stones, Guns and Roses, and Creedence Clearwater Revival. 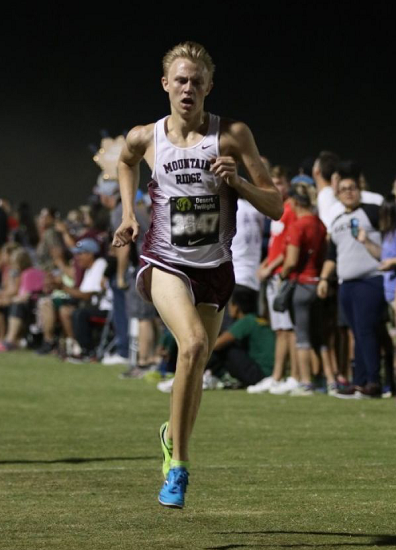 Right: Reier Gilbertson took 5th in the Boys Championship race at Desert Twilight.-photo by John Hays
Who was your biggest competitor?
My biggest competitor and rival would have to be Jacob Lewis. Coming from a school just a couple miles away I would race him at just about every meet we had. He will transition from a competitor in high school to a teammate in college as we will be rooming together.
If you could do it all over again what would you change about your running career in high school?
If I could change anything about my highs school running I would've taken my underclassman years more seriously and not think I had so much time in high school.
What were the most difficult obstacles you had to overcome?
My most difficult obstacle was sickness over very key races, including senior cross-country state championship race.
What will you miss the most about competing for your team?
I will miss my teammates and coaches the most. We have grown together not only in running but more importantly as friends. I will miss succeeding and failing with them as a team.
What advice would you give to younger athletes?
I would tell young runners to not get down after disappointing races or practices stick with it and stay humble. Also, people get so caught up in PRs and ranking, which is very important but overall dont forget to have fun.
What influence has your coach had with respect to your performance and overall life goals?
My coaches are the single biggest influencers in my running career and life. Coach Tate and Coach Stein have set me up to compete with the highest level of athletes in the state and helped me continue the sport to the next level.
What are your college plans? Have you decided on a major?
I will be attending Grand Canyon University and running under the legendary runner and Coach Sara Slattery. Sara Slattery is an amazing runner and an even better coach. Academically, as a pre-med major they have very involved teachers and the proper facilities to do well. 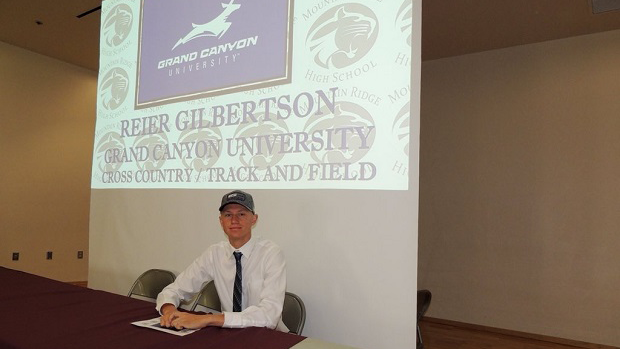 (photo provided by Reier Gilbertson)
How did you decide that GCU was the right fit for you, academically or as an athletics program?
Well I really loved the coach there. Sara Slattery is an amazing runner and an even better coach. Academically, they have very involved teachers and the proper facilities for me to do well as a pre-med major. Also, I did look at out of state colleges such as Portland State, Western Oregon and Gonzaga, but the more I looked out of state the more I wanted to stay in Arizona. I love Arizona because it has all I want as a snowboarder, climber, backpacker and I just love the outdoors here.
You said that will major in pre-med. What made you want to go into medicine?
I'm very interested in how the human body works and I love helping people so I created the best match. What event would you be interested to try in college?
Definitely excited to try the Steeplechase.
Who would you like to thank for your success in high school?

I would like to thank my parents, Kevin and Anne Gilbertson, for my success in running because of their support they give me every day by never missing a meet and encouraging me no matter what the outcome.

1. What's the last movie you watched?
The Goonies
2. What's your favorite training shoe?
My favorite training shoe is the Brooks Adrenaline.
3. Where is the best scenic view in Arizona?
Best scenic view in Arizona is from Mt. Humphrey's
4. What's the best literary work you read in high school?
'Into The Wild'
5. If you could go on a long run with any professional athlete who would you pick?
Phil Mickelson
Boys 1600 Finals Section 2 Brophy AMDG Invitational Mar 10, 2018
Tweets by MileSplitAZ