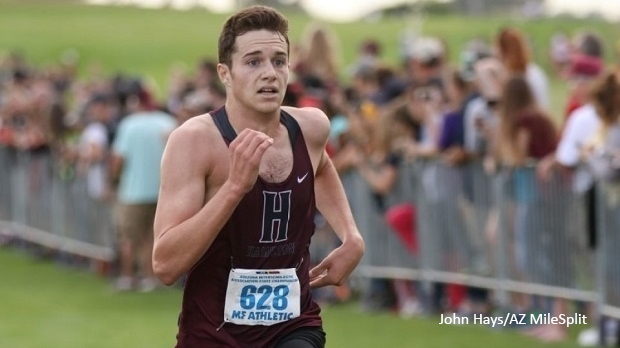 PRs
800m -- 1:55.80 @ Willie Williams (2017)
1600m -- 4:22.30 @ Chandler Rotary Invitational (2017)
3 Mile -- 14:30.10 @ Woodbridge Cross Country Classic (2017)
5K -- 15:24 @ Desert Twilight Festival (2017)
David Nelsen led the charge for the Hamilton Huskies' cross-country team since his sophomore year during which he placed 12th in the D1 Boys race at the State Meet. As a junior last year, he anchored the Hamilton Boys' 4x800 to victory for the Division 1 Title at the State Championships and also placed 2nd in the D1 Boys' 1600m run of the tournament. Last fall, he returned to Cave Creek Golf Course to place 4th in the D1 Boys State Championship race.
Where are you from and when did you begin running?
I'm originally from Austin, TX. I've lived in Arizona since kindergarten and I began running track in 7th grade.
What was your most memorable race?
I'd have to say the State race for cross country because it was one of my more exciting races. Senior year was a monumental year and as the last hoorah there was a lot of pressure.
Did you ever listen to music before competing?
I didn't listen to music before races or workouts. I preferred to be with my own thoughts but that might change in college. As I got older and warmed up by myself, I just preferred to enjoy the ambient noise.
Who was your biggest competitor?
Anthony Haren since we're both in Chandler. I've followed him for a while and we always raced each other at City. We've trained together on occasion too.
If you could do it all over again what would you change about your running career in high school? 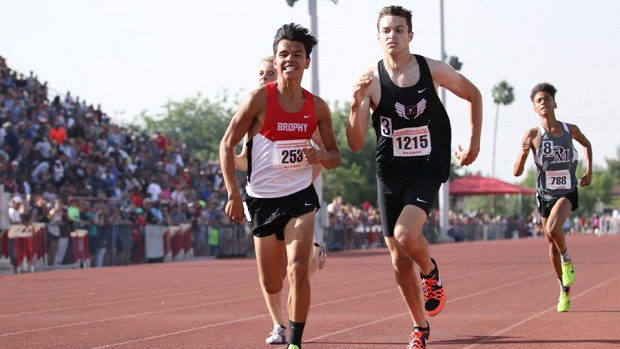 Left: Last year, David took 2nd to Hociel Landa in the D1 Boys' 1600m at the State Meet.-photo by John Hays
I would have take stretching and injury prevention more seriously. I also would have gone after the two-mile a little more aggressively.
What were some of the most difficult obstacles you've had to overcome?
After Seamus White left Hamilton in 2015, it was really tough to be alone as a sophomore and not be able to train with people as fast as I was. As a freshman I broke my meta-tarsal in my foot and was able to bounce back and compete at my first track and field State Meet.
What did your coach say to you to give you more confidence in that responsibility as the fastest on the team?
Coach Vaughan was very adamant about Senior leadership so he didn't stress me to be a leader when I wasn't prepared for it. I think I learned leadership qualities through other avenues like Boy Scouts and while Coach Vaughan didn't make me a team captain until I was a Senior, he recognized me as an underclassman for always helping set up the tent and leading the warmups. Having a strong relationship with your coach helps a lot.
What influence have your cross-country and track coaches had with respect to your performance and overall life goals?
Coach Moomaw, my cross-country coach, was my first coach. He instilled in me school spirit and was an important part of that shift from middle school to high school running. He gave me a lot of advice on running and on life. Coach Vaughan, my track coach, taught me the value of competition and was very good at mental preparation. He prepared me for collegiate track. He's a very goal driven man and likes winning.
What will you miss the most about competing for your Hamilton?
The people and the prestige. The Hamilton community is very strong and we also have a wall with pictures of our state champions which is a daily reminder. There will come a time when I don't know anyone from Hamilton, and that's when I'll really miss it. By that time I'll be so immersed in college and my future that it won't be a big deal.
What advice would you give to younger athletes?
Working outside of practice is important to being successful like stretching and rolling out. Also, never assume anything. I assumed a lot and it led me to a lot of heartbreak and left me feeling unsatisfied. Stay humble.
What are your college plans? Have you decided on a major?
I am running cross country and track for the US Naval Academy and I will major in Engineering.
How did you decide that the Navy was the right fit for you, academically or as an athletic program?
I visited the campus and it felt like an adventure. The Navy community is a highly motivated culture and felt like an offer I couldn't refuse. Also, Coach Cantello has been coaching for over 50 years.
What do you like to do outside of running?
I like to play basketball and I also play ultimate frisbee. I like that the Naval Academy, everyone's very fit and it's hard to find that discipline at other schools.
Who would you like to thank for your success in high school?
I'd like to thank both Coach Moomaw and Coach Vaughan. I want to put emphasis on my parents. They've always been very invested in me. My mom motivated me and my dad prepared me for every race. My dad actually ran a 4:21.5 mile and 1:58 for 880 yards in high school.
Fun Stuff!
What's your favorite sports team?
The Arizona Cardinals
What's your go-to running shoe?
My go-to is usually the Asics Gel-Cumulus
If you could go on a long run with any professional athlete who would it be?
Bernard Lagat
What was your favorite subject in school?
I'd say English was probably the most fun. I had some really good English teachers.
Would you rather be able to play any instrument or communicate in any language?
Know any language. That would be so cool. My Spanish teacher knows a lot of languages.
Tweets by MileSplitAZ