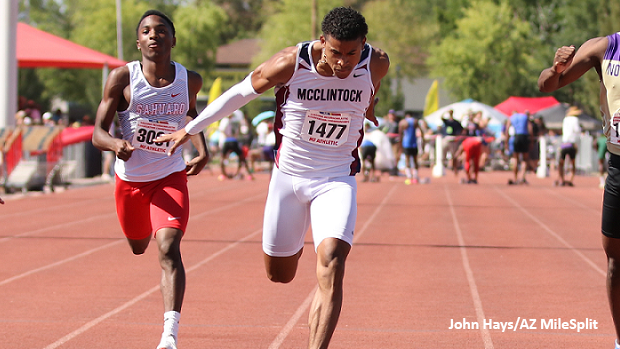 PRs
100m -- 10.62 @ AIA Division II State Championships
200m -- 21.60 @ AIA Division II State Championships
400m -- 49.13 @ Chandler Rotary Invitational
Stacey Boyd began his career for the Chandler Wolves but transferred to McClintock High School for his final two seasons of high school track. After tearing his hamstring in 2017, Boyd sat out his junior year and returned to the track in this past March. This year, he claimed the victory in the Division II 100m and 200m races with PRs at the State Championships.
Where are you from and when did you begin running?
I am originally from Buena Park, California. I began running track in 5th grade.
What was your most memorable race?
My most memorable race has to be the 100m at the state championships this past season.
Did you listen to music before competing? If so what's on your playlist?
Oh yes! I always have to have some tunes in my ears before competition time. I'll play a little bit of 2 Chainz, Mozzy, and I always have to have dreams and nightmares by Meek Mill.
Who would you consider your biggest competitor over your four years?
My biggest competitor was for sure Tyrees Moulton.
Below: Stacey Boyd edged out Tyrees Moulton for the State Championship Title in the D2 Boys 200m.-photo by John Hays 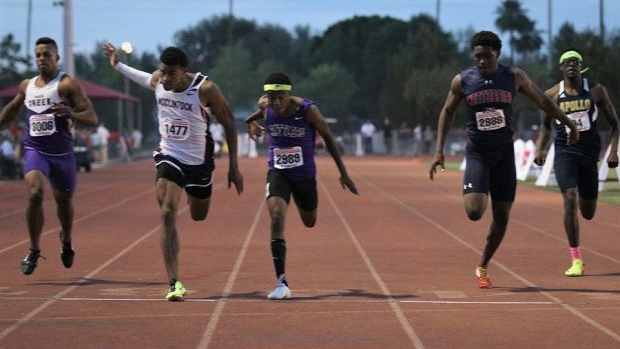 What was your greatest accomplishment?
My greatest accomplishment was winning the 100 and 200 at the state championships, ending with a great senior season!
If you could do it all over again what would you change about your running career in high school?
If I could do it all over again I probably would have tried the 100 more, because I only ran it 4 times this past season.
What were the most difficult obstacles you had to overcome?
I had to come back from my injury my junior season, faster and stronger which was extremely difficult because I still felt some pain this year towards the beginning of the season.
What will you miss the most about competing for your team?
I will miss the practices! We worked hard but we always had fun.
What's the most important thing you've learned from your high school coach?
My High school coach taught me to trust the process. He told me my time is coming, I just have to do the work and the results will handle themselves.
What advice would you give to younger athletes?
Stay on the grind! You may have to make some sacrifices but it will pay off in the long run.
What are your college plans? Have you decided on a major?
I want to make the All-Time top 10 list for Wisconsin as a freshman! I will be majoring in kinesiology!
What about Wisconsin attracted you to sign with the Badgers?
When I went on my visit my dad made me go by myself since it was so far away from home so I could see how it would feel being alone... but as soon as I met the coaches and the team, home was the last thing on my mind! The facilities, the team/coaches, and the scenery in Madison, Wisconsin felt like it was a place for me! I felt like a would have a family away from home and experience something new.
Who would you like to thank for your success in high school?
I'd like to thank my father, my grandma, my High school coaches, my massage therapist Seth, and my little brother!

If you could have any superpower what would it be?
If I could have any superpower I would like to be able to teleport!
What's the last movie you watched?
You know I had to go see the new Incredibles!
Who's your favorite athlete?
It would have to be Sydney McLaughlin for sure!
What was your favorite subject in school?
My favorite subject in school was chemistry! We did a lot of cool experiments and learned some crazy things.
What are you most excited to do when you get to Madison?
I'm excited to see what all the hype is about for the home football games and also experience the college life.
Boys 400 Finals Section 12 Hohokam Invitational Apr 15, 2018
Stacey Boyd-1st in Boys 200m Rattler Booster Invite Mar 18, 2018
Boys 4x400 Relay Finals Section 3 Brophy AMDG Invitational Mar 10, 2018
Boys 400 Finals Section 7 Brophy AMDG Invitational Mar 10, 2018
Tweets by MileSplitAZ