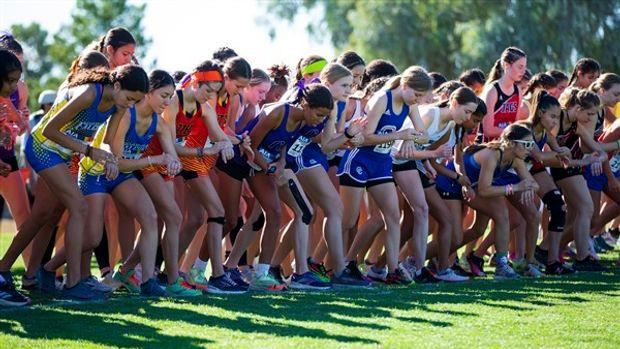 The start of the Division I girls race at The AIA State Cross Country Championships at Cave Creek Golf Course in Phoenix.

After an exciting first season covering high school cross country in Arizona, it is time to reflect in this first installment of Correspondent Column. This season has been full of excitement from the Chandler Invitational early in the season, to the incredible Desert Twilight Festival, and finally the AIA State Championships.

Tallying up the numbers, I attended 12 meets in total and conducted too many interviews to count with a multitude of athletes. To all of the athletes and coaches who took time out of their day to chat with me, thank you very much.

Desert Twilight was one of the best meets I have ever attended; I can easily see why this is the crown jewel of Arizona cross country. Twilight might not have had the crazy fast times it is used to having, but there is no doubt the competition was any less than expected. Getting to see some of the best talent in the Southwest was incredible. The performance by Niwot's girls team was astonishing, putting all seven in the top 15 is something that you just don't see at big meets with nationally ranked competition.

Enough about Desert Twilight though, lets talk about the state meet.

Starting with the morning session, Valley Christian senior Lauren Ping lived up to her expectations as the best girl's runner in the state, putting down the fastest time of the day. Ping disposed of the competition early and didn't look back running a majority of best girl's time of the day by herself.

The morning session was not filled with many upsets, except in the Division II boys team competition. Defending champs Flagstaff was close to adding another title to their record, but Ironwood Ridge pulled off the first upset of the day. The performance put on by their two through five runners was the epitome of cross-country team running, edging Flagstaff's two through five runners in some instances by just one place. If you want to come for the king, you better be ready, and Ironwood Ridge was.

The afternoon session was action packed and lived up to the hype, so let's take it one race at a time.

Division III first, Salpointe Catholic senior Boston College commit Kylie Wild took her third state title by over 30 seconds after her closest rival did not finish the race. The Chinle girls stormed to a team victory off the back of placing four of their runners in the top 15.

The Division III boys race was not lacking fireworks either, with a race that came down to the last 20 meters. Ganado senior Micah Slivers followed every coach's words of race though the line, pipping Salpointe Catholic senior Michael Urbanski to the line. Slivers win was filled with emotion as he crossed the line and immediately after when he found his family and celebrated with them.

Moving on to Division I, where the individual title in the boys and girls were both up for grabs. Standing at the finish line for most of the race I could not see exactly what was happening out on the course, but thanks to 21st century technology, I knew the race went out fast. Senior Gibson Kibia of Chandler took some inspiration from Steve Prefontaine and broke everyone through the first two miles, running both under 5 minutes.

I was wondering how this move would pay off for Gibson, but as he crested the final hill, he had a comfortable lead winning by 18 seconds and becoming the fourth runner under 16 minutes on the day.

On the team side of things there was no doubt in my mind, and I am guessing a lot of other people that Highland was going to easily take the title. Putting four of their scoring five inside the top 10 and all five in the top 20, that ladies and gentlemen, is how you win a state championship.

On the girls side the individual race was one that also was wide open, but what a way to cap off your senior season than with a state title, and that's what Highland's Emma Baugh did. She completed the 1-2 finish with her sister, and to add to it, her teammates put together one of the best team performances the state has ever seen. Highland girl's put all seven inside the top 15 and their scoring five all in the top seven. That is absolutely insane to do at a state championship meet.

Looking towards next year there are names that are going to be carrying some big expectations. A small list includes Northwest Christian junior Glenn Thomas, Millennium junior Landen LeBlond, Highland sophomore Cloe Baugh, Highland junior Timothy Willford, and Red Mountain junior Matthew Hamilton, and the list goes on. Cross country in Arizona is getting better and better, and it will not be long till the Grand Canyon state produces high caliber national athletes year after year like the other big states.